The K-State women’s basketball team hit the ground running in their third game of the season against Oral Roberts Monday night. The Wildcats were relentless in their efforts and came out on top 109-69.

This is the second time since head coach Jeff Mittie’s arrival in 2014 that the Wildcats have scored over 100 points in a game. Monday was the team’s highest scoring night since 2002.

Mittie said he was pleased with the team’s performance despite foul trouble.

“It was probably as good of a start as we could’ve imagined, we were hot early,” Mittie said. “I think our defense was really good early. … We were in a really good rhythm. We were timely tonight with passes. We were really aggressive pushing the ball, and defensively we got after them. We’ve got to foul less. That’s the problem. We’ve got to correct those things, but all in all, pretty pleased with our performance.”

At the half, the Wildcats had a 63-32 advantage and with no intentions slowing down. Fourteen seconds into the third quarter the senior forward Peyton Williams hit a big three pointer to open up the score. Williams finished the night with 11 points and three assists.

Sophomore guard Christianna Carr sank five three-pointers. Carr said it was all thanks to her teammates who made it easier for her to get those shots in.

“Just being able to take and make open shots, doing my part of the job,” Carr said. “If your teammates are finding you and you are not making open shots, I would expect someone to tell me to quit shooting. My teammates did a great job of finding me.”

Carr finished the night with a career high 24-points with two assists and four rebounds.

K-State had had seven players score more than ten points.

Next, the Wildcats will prepare to host UT Arlington at 2 p.m. Sunday. This will wrap up the team’s six-game home stretch ahead of the 2019 Junkanoo Jam Tournament in the Bahamas Nov. 29 and 30. 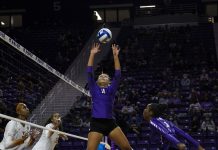