As the holidays approach, families struggle to decide whether to bake cookies or cake for their Thanksgiving dinners. Girlfriends and boyfriends fret over the perfect gift for their partners. Retail employees brace for the onslaught of slashed prices and long lines.

But somewhere in the United States, a parent worries about finding clean water for their children. Somewhere in the world, a family will lose one of their own because a hospital doesn’t have access to proper sanitation.

Somewhere in the world, someone lacks access to basic needs. Kansas State’s chapter of Engineers Without Borders strives to implement ways to meet those needs.

The chapter partnered with the El Amate community in Guatemala to produce needed infrastructure. Irma Ailon, EWB community liaison and graduate student, is from Guatemala and said projects take a lot of team effort.

“The KSU-EWB members are passionate about the vision of EWB-USA and I have witnessed their work as they strive for a better tomorrow for those who need the most help,” Ailon said. “I work closely with the international lead team as an interpreter and community liaison.”

“If you’ve ever heard of Doctors Without Borders, it’s kind of a similar concept where we will do engineering-oriented service projects both locally — that can be here in Manhattan or throughout the state of Kansas, even kind of neighboring states — or internationally, which is where I specialize,” Cox said.

Striving for a better tomorrow

President of EWB and senior in mechanical engineering, Abby Kerber, said the best way to describe the organization is through their mission statement.

“Our mission as a whole is to build a better world through engineering projects that empower communities to meet their basic human needs with highly skilled volunteers to work with communities to find appropriate solutions for their infrastructure,” Kerber said. “What that kind of translates to is providing solutions, like technical expertise, to communities that might not have that resource to help them meet the needs of their concerns.”

Zach Newman, international project lead for EWB and junior in architectural engineering, said the group is not only for engineering students — but for students who enjoy service activities and involvement.

K-State’s chapter of EWB has worked with Guatemala for a few years on projects including new schools and sanitary plumbing. In January, a few members will travel to Guatemala to begin their next project, a retaining wall.

“The past three years we’ve been working on this, and pictures are great — they’re essential to work on it, but we’re reaching a point where we haven’t traveled in a while and it’s tough to engineer something when you haven’t even been to the site, so it’ll be extremely advantageous,” Cox said.

“During the wet season in Guatemala, it rains like every day and [we] sort of started to see some irrigation issues — erosion issues that are threatening the projects that we’ve already built, so building this retaining wall is going to fix the irrigation issues as well as just optimize the usable space that they have in the area,” Cox said.

Kerber said partnerships in EWB are long-term — they don’t leave the community on their own after they finish their projects.

“We stay with that community for another 5 [or] 10 years, and we’ll go back in a couple years and check on everything, make sure everything’s still running how it needs to, making sure it’s being maintained properly,” Kerber said. “Because one of the common pitfalls in some humanitarian organizations is like they’re like, ‘Here you go, we built this for you,’ and they leave, and it falls by the wayside because the community is not used to using it and that kind of thing.”

Newman said finding funding for travel can be tough to come by. Since the organization is a non-profit, funds come solely from donors, grants or fundraising.

Kerber said none of the donations can come from or within K-State.

“The College of Engineering can’t give money to us, to our organization, for international projects, which is kind of unfortunate, but that’s just how it is right now,” Kerber said. “So it’d be donations directly to our chapter, and so we also apply for grants and do things like that. Grants and individual donations are definitely the biggest way to finance our trips.”

Cox said he found his way to EWB because he thought of the organization as a call to action.

“We have this incredible industrialized engineering in the United States, and you can come to university and get a really high level education and do that — and that opportunity is more or less available to the majority of Americans, but that opportunity is just not even available for people in developing countries,” Cox said. “They don’t have the resources or the education necessary a lot of times to fix their own problems — it’s not that they don’t have the talent or the intellect.”

Kerber said she thinks it’s phenomenal that she can tackle difficult situations hands-on while in college. If people are left wondering how they can help others, EWB is a way to do it, she said.

“Why I even became an engineer is because at the root of all things — engineers are problem solvers, engineers are the ones who are going to be working on frontlines of problems, whether its food scarcity, climate change, overpopulation, defense, health things like safe water — all that stuff, engineers play a huge role in it,” Kerber said. “That’s why I became an engineer and EWB gets to tackle some of those root causes, which is just very unique.”

Kerber stressed that EWB doesn’t do anything for communities, but with them. Some communities involved in EWB learn how to create and finish projects because of the organization, Newman said.

Ailon said it is rewarding to see the impact the project has on the community.

While many areas of the United States have access to safe, functional infrastructure, it is crucial to remember there are places that still struggle with having necessities like safe hospitals, Kerber said. These are the places where organizations like EWB can step in and help out.

“While there’s tons of cool things happening [in] engineering all the time, whether it’s SpaceX or the Hyperloop and just crazy, insane things that are like year 3000 kind of things, there are people that are still not having their basic needs met,” Kerber said. “Even the United States — look at Flint, Michigan — they still don’t have clean water after all these years. That’s wild, but these are places that engineers can step in and have to step in.”

Ailon said being involved in EWB allowed her to grow as an individual and reminded her of the ample opportunities there are to reach out and help.

“I’ve always thought of … giving back to my native land,” she said. “But what I’ve been reminded of is that it’s never too late to take initiative, if you want to help. In this case, I didn’t see the impact that this organization was going to have on me … I’ve learned so much from everyone, [and] I’ve learned so many lessons.”

‘When the students are successful, we all succeed,’ incoming engineering dean says

Helwigs invest in naming department of biological and agricultural engineering 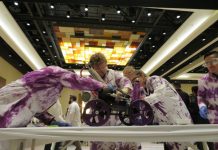