The plaintiffs in the Title IX lawsuits against Kansas State dismissed their cases on Tuesday.

According to a press release from K-State’s Division of Communications and Marketing, the university did not provide plaintiffs and former students Sara Weckhorst and Tessa Farmer any “monetary payment or other form of compensation.”

The two lawsuits pertained to the off-campus sexual assaults of Weckhorst and Farmer at fraternity events on separate nights. Afterwards, both women complained to the university.

“KSU refused to investigate or take any action against the perpetrators, allowing them to remain on campus, and justified its indifference on the basis that the rapes occurred off-campus,” reads a statement made earlier this year from The Fierberg National Law Group, which represents Weckhorst and Farmer.

Both women sued K-State on the basis of Title IX, outlining perceived “deliberate indifference” and inaction, creating a learning environment that left them “vulnerable” to further harm at the hands of their attackers.

In 2017, Weckhorst’s attacker Jared Gihring was convicted of rape and sentenced to 12 years in prison.

“Ms. Farmer and Ms. Weckhorst are proud of the legal precedent they’ve established through their lawsuits including in the U.S. Court of Appeals for the Tenth Circuit,” their lawyer Jonathon Fazzola said over the phone. “It has been a long journey and both women are excited to focus on with their careers and families.”

In March, the Tenth Circuit Court of Appeals denied K-State’s motion to have the cases thrown out, upholding the district court’s findings that Title IX anti-discrimination legislation is applicable in these cases.

“A Title IX plaintiff’s alleged fear of encountering her attacker must be objectively reasonable, but under the horrific circumstances alleged here Plaintiffs have adequately alleged that KSU’s deliberate indifference to their rape reports reasonably deprived them of educational opportunities available to other students at KSU,” the court of appeals wrote in their 27-page long decision.

In regards to the decision of the plaintiffs to withdraw the cases, the university statement on the matter says K-State has a “longstanding practice of helping students” and these instances were no different.

“This result affirms K-State’s long-stated position that it responded appropriately and in compliance with Title IX when Weckhorst and Farmer each reported they were sexually assaulted off campus,” the statement reads.

The lawsuits were dismissed with prejudice, which means Weckhorst and Farmer cannot bring forward a new suit on the matter in the future. 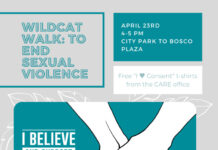