The men’s basketball team (4-2) returns home after a disappointing trip to the Ft. Myers Tipoff, losing both games after an encouraging 4-0 start. They will look to bounce back on the winning track with two games at Bramlage Coliseum.

The first game will be against Florida A&M at 7 p.m. Monday. This game will have an Operation Santa/Team-Camper Night theme. It will be televised on ESPN+.

The second game will be against Marquette at 8 p.m. Saturday. This game will have a theme of a white-out. It will be aired nationally on ESPN2.

The women’s basketball team (3-3) will also look to get back on the winning track after following a three-game winning streak with a three-game losing streak. The Junkanoo Jam dealt the Wildcats two close losses in the Bahamas.

They will play two games this week, one at home and one on the road. The first game will be against UIW at Bramlage Coliseum. This game has a theme of Ft. Riley Operation Santa and will begin at 6:30 p.m. Tuesday.

The second game will be in Fayetteville, Arkansas, as they will take on the Arkansas Razorbacks. This game will tip-off at 2 p.m. Saturday. 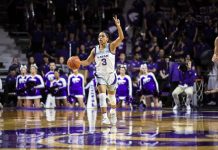