With bowl season right around the corner, sometimes it can be confusing to try to understand where and when the Kansas State football team will play its post-season game.

Bowl predictions are difficult to make with games remaining and a four-team tie for third place in the Big 12. K-State’s bowl destination relies on the outcomes of conference championship games slated for this weekend.

The selection process starts when the College Football Playoff Committee comes out with its final top-25, with the top four teams placed in the playoff.

This is the first complication for K-State fans trying to decide where to plan for the postseason. If Baylor or Oklahoma make it into the top-four, they likely move up one bowl game.

After the semifinals are filled, the Big 12 has one guaranteed spot in a New Year’s Six contract bowl game: The Sugar Bowl. This spot will be filled by the Big 12 Champion, unless they make the playoff in which case the runner-up will fill the spot.

After that, the remaining bowls with Big 12 contracts will choose teams in the following order: the Alamo, Camping World, Texas, Liberty, Cheez-It and First Responders bowls.

They can choose any team with at least six wins, provided it isn’t already selected for another bowl.

The major concern for bowls is getting people in stadiums and eyes on TVs.

Here are some predictions based on various championship game scenarios.

In that situation, the runner-up slides into The Sugar Bowl. The Alamo Bowl likely nabs Texas and pairs them with Southern California. K-State likely ends up in the Camping World Bowl in Orlando, Florida, against Notre Dame or gets passed up and ends up in the Texas Bowl.

This scenario also likely plays out if the Big 12 Champion is left out of the CFP but by some unlikely event both Oklahoma and Baylor make New Year’s Six bowls.

Big 12 Champion is left out of the CFP:

The Big 12 Champion gets the Sugar Bowl bid in this scenario, bumping the runner-up down to the Alamo Bowl. It is unlikely that a Big 12 team gets an at-large bid to a New Year’s Six bowl this year.

The Camping World Bowl gets a home-run match-up of Texas and Notre Dame. K-State or Oklahoma State end up in, as a toss-up, the Texas and Liberty Bowls. Both bowls match with a Southeastern Conference team.

K-State fans will find out for sure Sunday afternoon after the CFP Committee announces their rankings and bowl assignments in a 3-hour special on ESPN starting at 11 a.m.

‘An electric kid’: Youngblood could be monumental player in K-State football history 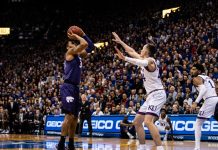