NASB invited attendees to make traditional crafts, including medicine bags and beadwork. As they worked on their creations, students listened to various presenters.

“In the same years that land grants were created, the Indian Removal Act was created,” Bitsie-Baldwin said. “So, understanding what a land grant means should go a little deeper than the mission of the university — understanding where these lands came from to support the mission.”

Raphael Wahwassuck, Prairie Band Potawatomi council member, gave the featured speech of the evening on the history of the Potawatomi tribe in Kansas and their current efforts to regain control of their land.

Originally, he explained, his tribe was not from the Midwest, but from the areas surrounding the Great Lakes.

“They offered, again, to buy the land from individuals as part of the Dawes Act,” Wahwassuck continued. “Well, when we were living here, when we were originally established in this area, we believed the land should be held in common … but again, it was imposed upon us. … We were pushed up here, into the 11-square-miles we live today.”

In the last twenty years, the Prairie Band Potawatomi spent an estimated $13 million buying back their land in Kansas.

“We bought the land when we were forcibly removed, land was sold from us and … we bought land again,” Wahwassuck said, “And today, we’re buying it again.”

Following Wahwassuck’s presentation, his children performed a tribal dance and students were encouraged to eat the frybread dinner — a traditional flat dough bread served with toppings and sides.

“We wanted to have a nice way to end the semester. … This time of year is very stressful for everyone,” said Victor Andrews, NASB president and graduate student in human ecology. 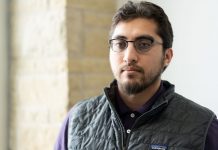