Fifteen K-State students competed against approximately 1,200 students from 77 schools across the country on security councils and policy position papers.

“The countries on the council were all small African countries, so it was a lot of research for the report writing body,” Chaffin said.

Chaffin and Molder presented a report to all of the other countries in their council and finished in the top three.

The K-State Model U.N. team began seven years ago and actively works towards securing more awards at national events. The team participates in a national conference each fall.

“We just have one big conference in Chicago, and we spend the whole semester leading up to that preparing for the event,” Chaffin said.

After the team is assigned a country, the students break into partners and small teams. The councils and positions depend on the country and region assigned.

“The number of councils and seats available for students to sit on depends on the country — for example, the United States and Russia are on every committee,” said John Filter, team co-adviser and associate professor of political science.

The selection process of countries assigned to schools is random and anonymously.

“They literally pick colleges out of a bin,” Filter said. “They roll the 77 colleges around and each college is given two countries to represent.”

Historically, K-State represented two countries, but due to budget cuts and lack of students, they represented just one country this year. Next year, the team hopes to represent Libya and the Netherlands. 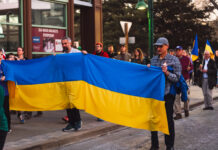