The women’s basketball team pulled out a close victory in Lubbock, Texas, against the Texas Tech Lady Raiders to earn the program’s sixth straight Big 12 road win — a tie for the largest road winning-streak in Big 12 history.

Kansas State started the game off strong and built a quick 12-7 lead. Senior forward Peyton Williams played a big part in the strong performance out of the gate, scoring eight in the early run.

The second quarter saw the lead change as three pointers were exchanged until senior guard Angela Harris and freshman guard Emilee Ebert knocked down back-to-back three pointers, including a plus one from Ebert to give the Wildcats a 29-24 lead.

Texas Tech then stormed back with seven unanswered points to take the lead at 31-29.

That lead didn’t last long for the Lady Raiders, as K-State came up with a steal on defense that lead to a score and some offense to take a 35-33 lead into halftime.

The Wildcats had the upper-hand for most of the third quarter, making use of a 7-0 run to build a 50-41 lead. The run was started with another three from Williams, her second in the game.

The Lady Raiders made the ending of the third quarter interesting with an impressive comeback attempt that included three three-pointers to tie the game at 52-52.

K-State finished the third quarter with a 55-52 lead as sophomore guard Savannah Simmons responded to Texas Tech’s run with a three pointer to beat the buzzer.

Texas Tech’s 60-59 lead in the fourth quarter was cut short as Harris responded with six straight points for the Wildcats, securing a lead that would linger until the buzzer, ending with a 76-72 win.

The women’s basketball team will take on Oklahoma State at 6:30 p.m. on Wednesday at Bramlage Coliseum. 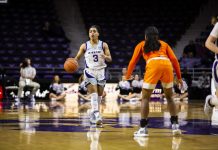