The track and field teams competing in their third meet of the spring season saw several personal bests as many Wildcats competed during both days of the Jim Green Invitational.

Freshman Kyle Johnston was one of the new faces for Kansas State in the men’s 800-meter where he recorded a 21st place finish with a time of 1:59.48.

After the last two days of competition, the Wildcats will look forward to the annual KU-KSU-WSU Triangular next weekend in Wichita, on Jan. 18.

In back and forth matchup, women’s basketball defeats Texas 60-54 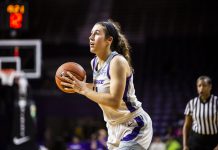 Aiming High: How Peyton Williams made her mark on the women’s basketball program