Protesters gathered for an an anti-war demonstration at Triangle Park over the weekend. Drivers passing by on Bluemont Avenue could read signs with messages such as “Give Peace a Chance,” “Sanctions Kill” and “One Iran war or Medicare for All?”

Manhattan participants joined 150 cities across the U.S. in this demonstration, which aimed to send a message to the White House to lift sanctions against Iran and for troops in the Middle East to depart.

Kevin Bryant, co-chair of the Manhattan Martin Luther King Committee, was one of the protesters in attendance.

“We’re coming up on a pivotal time here, we always gloss over [Martin Luther] King and especially at this time,” he said. “We have the ‘I Have a Dream’ banner and everyone thinks of the ‘I Have A Dream’ speech, but there’s a lot more behind that.”

Bryant recalled when King came to Manhattan in 1968 and 7,000 people gathered in Ahearn Fieldhouse, but 3,000 people were outside protesting the war in Vietnam because King was against it.

“A lot of people don’t realize that there was a whole bunch of things that he spoke [about] that apply to now,” Bryant said. “He talked about endless wars and how we can economically support killing somebody and then we’re not supporting people at home. … We always go to the catchphrase ‘I have a dream,’ well I have a dream we’re talking about economic, we’re talking about America’s foreign policy, which is tied hand and hand you can’t doubt that.”

“I just hope to get people thinking about it at least,” she said. “Sanctions really affect the economy of Iran, they can’t get medicine, it makes it harder for them to live their lives. We’re sanctioning multiple countries at the moment. I hear all the time that we’re tired of the endless wars and I want more people to come out and voice that opinion.”

Another protester, Rex Fowals, spoke out strongly against U.S. sanctions against Iran.

“Maybe [people] will start talking about Iran,” he said. “A lot of people say well we’re not at war with Iran, well we got a lot of sanctions on them. … We really are at war and now that we’ve killed this top leader.”

Fowals was referring to the assassination of senior Iranian military commander Qassem Soleimani in a drone strike in Baghdad, which took place earlier this month. 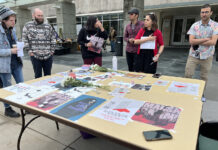