Most students come to Kansas State to grow and develop themselves through education and various other student engagement activities. Francisco Cardoza has dedicated most of his time at K-State helping others and building a sense of community for Hispanic students on campus.

“When I came to K-State, it was like a different feeling,” he said. “I felt comfortable, I felt like there was a sense of community.”

For Cardoza, the Hispanic American Leadership Organization offered him the opportunity to thrive as a leader. Since he joined HALO during his freshman year, he has held multiple positions in HALO, first serving as the community service chair, and now as the president.

Leadership has not always been his strong suit, Cardoza admitted. In high school, he was quiet and reserved. It wasn’t something he considered until his junior year of high school, when he joined the National Honor Society and his classmates looked at him to be the next president.

“Growing up I never saw myself as a leader, I thought you had be like born as a leader,” Cardoza said.

When he found out about the leadership studies minor offered at K-State, Cardoza said he knew that was something he was interested in doing.

Cardoza said leaders don’t need to be “good at everything” either.

“You don’t have to have strengths in every single area; you can have strengths in one area and maximize that and then find other around you, teammates, people around that can fill those holes,” Cardoza said. “That’s what being a leader means.”

As president, these leadership traits he has acquired have shown through how he interacts with members of HALO and how he runs meetings and works with the executive board.

Ingrid Silva, senior in feed science and management, is a member of both HALO and Kappa Delta Chi sorority. Silva has witnessed Cardoza’s growth more than most, having met him in high school before sharing upper-level classes with him at K-State.

“He was fairly shy, he kinda liked to stay within his circle, and didn’t really like to go out of his comfort zone — let alone give presentations up in class,” Silva said. “He was a lot more introverted.”

If it weren’t for HALO, she would not have seen Cardoza reaching out to leadership studies or wanting to do more, Silva said.

“We would just do stuff with HALO, we would not do stuff with LULAC we would not mess with SHPE — it was very separated,” Cardoza said. “So for me personally, I saw that as an opportunity like why not get together and do something special, and then reaching out to SHPE and LULAC, they felt the same way.”

When the three groups convene, Cardoza calls them united meetings. Though each group has a different focus, overall they still want to get together and meet different people, he said.

Cardoza said his next objective as he starts his final semester at K-State is to push HALO to become even more involved in the community. 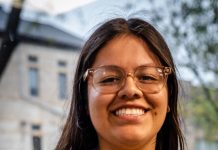 She’s a rapping queen: Meet the winner of the 2019 Belleza Latina pageant