On Wednesday, the College of Arts and Sciences hosted the sixth annual Civil Rights Teach-In in the Staley School of Leadership Studies as a part of Martin Luther King Jr. observance week.

The two-hour event featured speakers that spoke about topics from history to modern issues in America.

One of the topics discussed was African American history in Manhattan, from the university, to the town itself.

For Braxton Hubbart, sophomore in elementary education, it was a reminder.

“I think it’s just crazy because you think about racism and how it’s become a big thing over the years,” Hubbart said. “You always think that you made it so much further, but to look back on the years and you see what has happened in the towns we are living in now, to hear how much of an impact it has had on the community.”

Racial inequality in America has not disappeared, and sophomore in elementary education Josie De Los Santos says it’s something that should never be ignored or forgotten.

“A lot of people just forget that those kinds of things still go on today, including me,” De Los Santos said. “So, it is always good to be reminded we still have a long way to go, but it is still good to remind ourselves that we should be contributing to the solution.”

Some other topics that were covered during the Teach-In were immigrant detention and gender. The faculty panel that presented over these topics answered questions from the audience.

During the Teach-In, student ambassadors were around to help. Melissa Bryan, senior in biology and Arts and Sciences ambassador said ambassadors worked behind the scenes on tasks that helped the event run smoothly.

“It’s so important,” Bryan said. “It’s important to be aware of the whole day and observe it and events like these allow us to do that.” 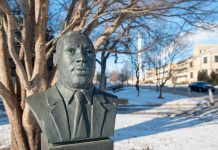