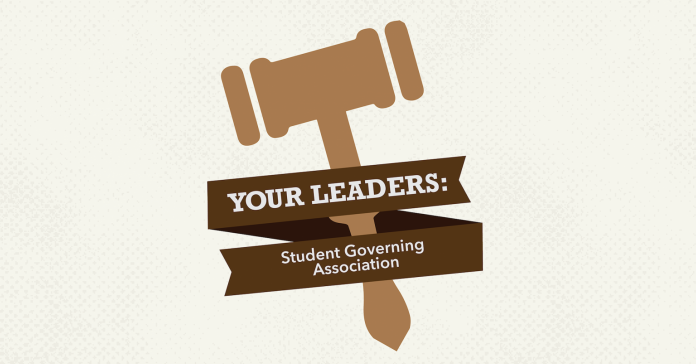 Student Governing Association convened for the first time this semester, singing “Happy Birthday” to Kansas to wish the state a late-159th birthday and “Home on the Range,” as well as formally adding a student representative from the polytechnic campus to student senate.

At the passage of a resolution celebrating and commending the state of Kansas for its history, student senate spent several minutes debating whether or not to sing “Home on the Range” in addition to “Happy birthday.”

Concerns about out-of-state student senators not knowing the proper tune or words to the state song were expressed.

“The words are one thing, but the tune is another,” Nick Beasley, student senator and senior in secondary education, said.

An amendment offered by student senator and sophomore in agricultural economics Alan Hinds to sing both songs passed without objection.

At the prompting of speaker of student senate and junior in finance Hannah Heatherman, the group singing of “Home on the Range” was put on hold until the end of the student senate meeting.

“Let’s get some fun going and set the tone for the rest of the year,” Beasley said. “Let’s sing about buffalo.”

Additionally, student senate formally passed a constitutional amendment that would allow a student representative from the K-State Polytechnic campus to sit on the body.

Heatherman said the passage of this amendment formalizes the working relationship between the main campus and the polytechnic campus, a collaboration she says was put into full gear this year with more collaboration and communication.

The amendment required a positive vote from 75 percent of the body, but passed without objection.

Larry Moeder, former associate vice president of student life and executive director of admissions and student financial assistance, was also honored with a formal commendation. Moeder worked at Kansas State from 1973 when he started as a student employee until December 2019 when he retired.

“Larry Moeder has been an invaluable resource to Kansas State University students,” the resolution reads.

The commendation was approved without objection.

Student senate will reconvene at 7 p.m. on Feb. 6 in the Wildcat Chambers.