According to an article from Rolling Stone, vinyl sales have grown tremendously. The article claims that “CD sales were declining three times as fast as vinyl sales were growing.”

Sisters of Sound, a local music store, has taken note of this trend.

Sarah Cunnick, co-owner of Sisters of Sound, said they started their shop with 50 percent vinyl and 50 percent CDs. She said she noticed that vinyl sales began doubling around 2010. Although she agrees with Rolling Stone’s research, she believes the numbers may be more than they’re claiming.

“The way they figure out how many sales happen, they’re only counting new vinyl,” Cunnick said. “There is hardly a way for them to track old vinyl. The reporting only takes place with the new vinyl.”

“It brings back memories of me and my uncle,” Ardery said. “We used to listen to a lot of records. When I was younger, he taught me how to take care of them and use them.”

Despite his love for vinyl, Ardery believes the best way to figure out what you like is to go to the shop. The store contains vinyl, CDs, cassettes and many other music listening options. Ardery began his vinyl passion simply by going into Sisters of Sound and trying out different forms of media until he found one he loved.

Benjamin Cartwright, senior in park management and conservation and Sisters of Sound employee, said he started coming to the shop as a sophomore because he and a friend were interested in music. When he began listening to music, it was intimidating because of all the options, but the friendly staff made the process smoother, he said.

“I would spend hours in here getting recommendations from Sarah and the employees. Being here longer and longer, it made me want to work here,” Cartwright said. “It’s not as hard or intimidating as it should be.”

Cartwright said he uses vinyl and cassettes, while others may have different preferences. He encourages all people to visit a music store to try out different forms of media and not to feel intimidated.

K-State track and field sets numerous records over the weekend 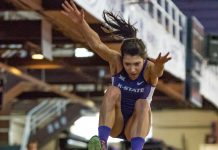