The Master of Arts in Teaching graduate program recently implemented a robot into its student teaching program.

Todd Goodson, assistant dean for teacher education and accreditation, and Eileen Wertzberger, field experience coordinator, faced a unique challenge during the 2018-2019 school year: one of their many graduate students looking to fulfill a student teaching requirement was unable to find a school compatible with Kansas State’s criteria in her home state of Georgia.

She wanted to stay in Georgia, but go to K-State.

“One of the initiatives and the pushes that we get in education is to be bold and to think in innovative ways to overcome obstacles like this,” Wertzberger said. “So it really just started out of conversations with principals and stakeholders about what this could potentially look like.”

It was a principal who suggested telepresence as a way to solve the issue, saying that telepresence allows for real-time interaction, movement around the room and one-on-one communication with students.

From here, the MAT graduate program went forward with the implementation of “robot” student teaching. The program used Double Robotics, which is a segway-like piece of technology that attaches its wheels and top half with a pole about the height of a 3rd grade student, although the height is adjustable. The head of the robot is an iPad that features the face of the student teacher.

With the robot, the graduate student was able to teach students in Kansas from Georgia.

“She would be able to go up and down and roam around the classroom if she needed to talk to a kid,” Wertzberger said. “There were some limitations, and we learned quite a bit about how to overcome that. The kids really would take care of her though. They would see her rolling around and if something was on the floor, they would just move it or they would wake her up on the screen.”

It required additional communication between the student teacher and her counterparts, and IT problems would regularly present themselves due to firewalls that schools require.

Despite the issues, Goodson and Wertzberger both agreed that the students, the cooperating teacher and the student teacher were profoundly impacted by the implementation of the robot. The experience was unorthodox in many ways, but also positive in many others.

“It was just incredibly meaningful and in ways that I think none of us really anticipated,” Wertzberger said. “One thing that the cooperating teacher said was, ‘it’s just such a privilege to be able to have my kids engaging with the technology that shows them that technology can help people can build bridges.’ And, I mean, the takeaway for them was pretty profound.”

This experiment would later inspire the implementation of robots in 36 rural schools across Kansas. The Rural Education Center looked to it to create their own initiative.

“They picked up the idea that, well, if a student teacher can do this, a veteran teacher could do it,” Goodson said. “And rural districts are struggling to get offer concurrent credit. Higher Learning Commission says you need 18 graduate credits in your field. And those teachers are hard to find in rural disciplines. So the idea would be, maybe we hire one highly qualified physics teacher and that person could teach through telepresence to five or six or seven or eight different schools.” 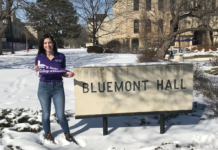 ‘I looked forward to seeing them every day’: Student teacher explores new territory of online education

‘I looked forward to seeing them every day’: Student teacher explores...