Entering the final ten minutes of play, the West Virginia Mountaineers had a 41-30 lead over the Wildcats. 7 minutes later, the Wildcats were down 50-32.

Kansas State called a timeout and came out of it a different team, which led to an impressive come-from-behind victory, 56-55.

Out of the timeout, senior forward Peyton Williams scored a layup leading to the start of 19 unanswered points.

Senior guard Angela Harris scored 18 points, a game high for her this season. With 49 seconds left, the Wildcats took a 51-50 lead.

West Virginia responded with a three-pointer to take the lead back, 53-51.

To add more padding to the lead, Williams made two free throws with three seconds left.

The Wildcats take on the Oklahoma Sooners at 2 p.m. Sunday in Norman, Oklahoma. 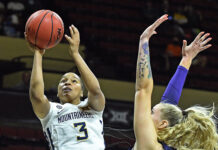