Cowboy Church is a service where people share their faith and love for rodeo culture while away from home. It has the same principle as a traditional church service, the main differences are the location and the dress code. Expected attire consists of boots and cowboy hats.

“Cowboy church… you can call it whatever you want, the only difference is we’re not in a church, it’s just at the arena,” Kory Keeth said. “There’s music, there’s a sermon. [Everybody from the rodeo is] obviously not at home for their home church, so this is just another place for them to come worship since they’re away.”

Keeth, a professional rodeo announcer and musician from Conway, Missouri, has been announcing at the K-State Rodeo and singing for the cowboy church for the past six years.

Keeth said when he was handed a mic for the first time, he knew he wanted to announce on rodeo’s biggest stages. He’s announced rodeo announcer for about eight years, and sings at cowboy churches along the way.

The service on Sunday morning was led by pastor Dale Hirschman.

Hirschman has been involved in rodeos since the age of eight, and discovered his calling to be a cowboy preacher through a church sermon.

The sermon that day was about a horse that was thought to be unbreakable. Through hard work, prayer and love, the horse eventually broke. When the sermon came to an end, a young Hirschman thought about how cool it would be to become a cowboy preacher.

“You might be discouraged from one time to the next, now follow Jesus Christ, and you’re thriving,” he said.

During the service Hirschman talked about how his faith has helped him.

Keeth said he plans to return to cowboy church at K-State next year.

“I love coming to K-State, it feels like home to me,” Keeth said. “The people here, the community, it just seems like a great place. They get an awesome crowd for the rodeo itself. … I just think the whole thing is very unique, they’ve got a lot of history, a lot of tradition.”

Keeth said he thinks the rodeo is something that many people on campus are missing out on.

“There’s a lot of people I feel like that are missing out on something that they could be involved in, just to know more about our lifestyle, the cowboy lifestyle and just more about animals,” he said. “I mean, I know this an agriculture school, but rodeo is so different, it’s so much different than just agriculture. We represent a lot of different things, I think that’s what makes it so unique.” 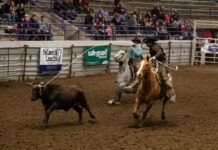 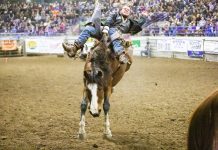 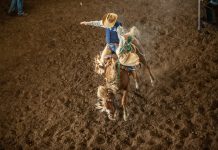 In the rodeo club, a typical day doesn’t exist