As a part of its Black History Month celebration, the Black Student Union hosted Kevin Richardson — one of the exonerated individuals belonging to the Central Park Five.

On April 19, 1989 Richardson, Raymond Santana, Antron McCray, Yusef Salaam and Korey Wise were arrested for a brutal attack on Trisha Meili. Richardson was later convicted of attempted murder and other chargers in 1990, the case hinging on coerced confessions obtained by police. Thanks to DNA testing, he was exonerated in 2002. He served more than five years in prison.

The Netflix show, “When They See Us,” is a four-part miniseries documenting their stories from their arrest until they were exonerated. Richardson said a documentary that tells his story and the stories of other wrongfully convicted individuals goes further than the Netflix show.

“At the end of the day, it isn’t just the Central Park Five. I think it is more about our generation,” Richardson said. “It’s a cultural thing because now we have that documentary to carry on our legacy for others, so now it’s bigger than us.”

Richardson also talked about the treatment he and the others received from the media, who demonized them and, in some cases, called for their deaths. He mentioned that Donald Trump took out an advertisement in a few New York newspapers calling for the return of the death penalty.

“Not only did it affect the the five of us — it affected our families,” Richardson said. “Our families received death threats from this. Without even knowing who we were, they were judging us.”

Richardson, who is now a father of two girls, said he still fears for them.

On Sept. 5, 2014, the exonerated five received a settlement of $41 million from the state of New York. Today, the five have dedicated their lives to fighting for prison reform and advocating for the wrongfully convicted.

“We have a long way to go,” Richardson said. “We want to change the dynamic of people of color being treated in society.”

Jullane Walker, senior in journalism and mass communications, said the speech served as a reminder about how how rapid things can change.

“It was very interesting to hear what he had to say in person,” Walker said. “And what I got from it was how quickly a persons live could change.” 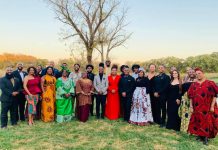