Unfortunately for the Kansas State men’s basketball team, Wednesday night’s 69-62 loss at Texas Tech summed up what the 2019-2020 campaign has been like for the Wildcats — frustration, missed baskets and the inability to get over the hump.

Just past the 10-minute mark in the second half and down 44-42, redshirt junior guard Cartier Diarra went up for an open windmill dunk, missed it and Texas Tech (17-9, 9-5) junior David Moretti proceeded to hit a huge three-pointer. In a game that was close the entire way, plays like those gave the Red Raiders the momentum they needed to pull out the victory.

That was just a small part of the frustrations for the Wildcats on Wednesday night, dropping their sixth straight game, the longest losing streak for K-State (9-17, 2-11) in the Bruce Weber era.

Emotions boiled over earlier in the game as well between Diarra and Weber, resulting in Weber throwing a stool on the ground.

Even with the frustrations, the Wildcats were resilient throughout most of the game. They kept the score close despite going down by double-digits multiple times throughout the first half.

Thanks to 21 combined points from freshman Jahmi’us Ramsey, redshirt freshman Kevin McCullar and sophomore Kyler Edwards, Texas Tech jumped out to a 28-17 lead in the first 16 minutes of play. A 10-3 run by the Wildcats, including six points from freshman forward Antonio Gordon, brought the game within three points at the break, with the score at 30-27.

Even with Texas Tech leading the entire second half, K-State battled with the Red Raiders, not letting the lead get over two possessions for the first 10 minutes. After the Diarra missed dunk though, it seemed that everything else was headed south for the Wildcats.

K-State could not catch a break from the field, while Texas Tech seemed like they could not miss, going up by as much as 13 points with the score at 64-51 with 1:32 to go. A valiant effort by Gordon in the end almost got the Wildcats back in the game, but a comeback was not meant to be as K-State dropped their 11th game this season by single digits, 69-62.

Even in the loss, K-State still had a solid shooting night from the field, shooting 47.9 percent overall. It was their three-point shooting that really came back to haunt the Wildcats in the end though, shooting just 23.5 percent from behind the arc compared to Texas Tech’s 38.1 percent.

Senior forward Xavier Sneed once again led the Wildcats in scoring, putting 15 points into the stat sheet as well as four steals, matching the team-high with Diarra. Gordon also had a solid performance coming off of the bench, as he was two rebounds away from recording a double-double, finishing his night with 14 points and eight rebounds.

The Red Raiders hit exactly half of their shots on the night, going 23 of 46 from the field and hitting eight crucial three-pointers. Moretti and Ramsey both led the way for Texas Tech, with Moretti scoring 18 points and hitting four shots from behind the arc, while Ramsey was just a point behind him with 17 on the night.

With just six games to go, including at least one game in the Big 12 tournament, the Wildcats are still sitting at the bottom of the Big 12 table. Weber’s worst season with K-State was in the 2014-2015 season, where the Wildcats went 15-17. Barring a surge at the end of the season though, this year’s team could go down with the worst record in Weber’s eight-year tenure with the Wildcats.

K-State’s next opportunity to get things back on track will be this Saturday in Manhattan for the throwback game against Texas (15-11, 5-8). That game is set to tipoff at 1 p.m. at Bramlage Coliseum, and can be seen nationally on CBS with live audio on KMAN radio. 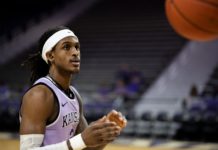