Editor’s note: This story is part of the Purple Threads series, which aims to tell the stories of Kansas State students who, despite their different experiences, are all connected in some way through the K-State.

When she was just 15 years old, Sara Savatovic moved away from her family to pursue her career. She was born and raised in Serbia, where she said students can choose their field of study prior to attending college. Savatovic attended a medical high school, hoping to work in pharmacy.

Now, she’s a graduate student in strategic communications. Kansas State recruited Savatovic from her high school track team and she began her undergraduate degree in 2013 on a track scholarship. After graduating in 2017 with her bachelor’s degree in public relations, Savatovic went to Europe for eight months and came back to K-State in the fall of 2019.

Savatovic’s story, while unique, is still similar to others.

Eric Ofori, an international student pursuing a doctorate in agricultural economics, was born and raised in Ghana.

“Initially I did my undergraduate degree in Ghana,” Ofori said. “Then I went on to Mississippi State, where I did my masters in agricultural economics and then I came here in the fall of 2017 to start my PhD.”

Ofori said one of the differences he noticed between the U.S. and Ghana was the way people behaved.

“One of the big shocks for me was … when I came here initially I said ‘Hi’ to people and they don’t say anything back,” he said.

Karim Majed, senior in marketing, is also an international student. He was born and raised in Beirut, Lebanon. But one of the more surprising things about Majed is that English is not his first — or his second — language.

“My first language is French, my second is Arabic and my third is English. And that’s how they taught us in high school — I started learning English at age 14,” Majed said.

Majed came to the states about five years ago and went to high school in Kansas for a year and a half prior to attending K-State.

“[My parents] encouraged it, like every Middle Eastern parent, I mean, they want their kids to go to a better place [to] get a better education for a better future,” Majed said about his parents’ thoughts on coming to the U.S.

Majed wanted to stay in Kansas because he liked his friends here. And when it came time to choose a college, K-State had a value that appealed to him.

“I went and visited KU — I liked it, I’m not going to lie,” he said. “But I just saw an emphasis at K-State on the word family, and family is something really big to me. It’s probably my number one priority in life.”

Alina Sadykova is another international student at K-State. Originally from Kyrgyzstan, Sadykova attends K-State as a graduate student in criminology. She stressed that she didn’t experience many difficulties when she first came to K-State. Everything went very smoothly, she said.

She said she has enjoyed the opportunities and resources K-State has to offer for international students.

“My country does not have this many resources to support students back home,” Sadykova said.

Sara Thurston, director of ISSS, says that K-State wants the transition for international students to feel comfortable and welcoming.

“We try to eliminate [what] the students have to do,” Thurston said. “It is very well orchestrated.”

International students are given checklists in seven different language options. Special outreach is also available in the first semester to aid in keeping up with how the students are doing. Thursday evening program classes such as U.S. culture and culture adjustment are also provided.

These resources can help students adjust in what sometimes feels like an entirely different world.

“It’s hard for international students coming here,” Ofori said. “It’s a new environment for them. And they came here with the hopes to learn new stuff and to better themselves. And it’s hard for them — not having your family here and all.”

Majed said he got through the transition by accepting that he needed to adapt to everyone else rather than the other way around.

Savatovic recalled some requirements she needed to meet when she got here.

“We have to go to Lafene Health Center to do TB testing and stuff like that,” Savatovic said.

Despite the feat of transitioning from one culture to another, each student found a way to connect with their communities and build a support system.

For Majed, adjusting to a country-like lifestyle was difficult since he grew up in a city, but he said it was worth it.

“If you give it [Kansas] a chance, and you actually go out there and get to know those people — which are really easy to get to know because they’re so outgoing and the hospitality is crazy — I mean, it turns out really nice if you do,” Majed said.

Majed said he misses speaking in Arabic, because it makes him feel at home. That said, he did stress that his support system in the states helps him immensely.

“I have like a second family here that kind of does make me feel home, which is hard because I’m very far from home,” he said. “My fraternity and my high school friends have been really helpful — made me feel like I have family here.”

Savatovic said her coach helped prepare everything for her when she arrived. Her teammates would also help in different ways — for example, they provided her with a way to get around since she didn’t have a car.

Savatovic noticed that athletes seemed to have better social capital than other students.

Throughout her first week on campus, Savatovic was given a day-by-day schedule. She was also given the opportunity to participate in Week of Welcome activities, such as going ice-skating, pizza night and an international student counseling event to allow the students to build friendships.

Sadykova, who was also caring for her child when she came to K-State, noted that several resources helped her adjust, including the Career Center, the writing center, Cats’ Cupboard and Jardine — the latter of which Sadykova said has given her and her child a well-maintained place to stay.

He said talking with international students is like traveling the world without ever buying a plane ticket.

“You get to travel to Ghana or Australia or England without having to go [there], you know, just by talking to somebody else from from another country,” Ofori said. 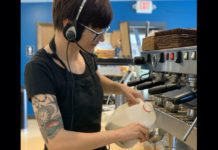