University architect and associate vice president of facilities of almost seven years, Ryan Swanson, will be departing from his position with Kansas State on March 6.

Swanson is a highly acclaimed architect; his experience includes positions as the university architect at Wake Forest University, and architect and assistant project manager for the Dallas, Texas, office of an architecture firm called SHW Group.

As university architect, Swanson made important decisions and plans regarding long-term projects that involved the overall coherence of the K-State campus.

“There are a lot of functions that go into being a university architect,” Swanson said. “It’s a very broad position. I think first you have to understand what an architect is. A lot of people think that an architect just draws things, but most of it is that … I am responsible for the overall vision of the K-State campus as a whole.”

Overseeing the campus as a whole includes things as small as the placement of benches along walkways, and as big as transitioning Mid-Campus Drive from a road into a walkway. Swanson also oversaw and developed projects on the Olathe and Salina campuses.

“The changes in the last 6 years have been good,” Swanson said. “There was the transition of Mid-Campus Drive, the addition of the Business Building, the engineering addition, the welcome center improvements and renovations in the union.”

All of these projects make up what Swanson will leave K-State being most proud of. Swanson said that he isn’t most proud of one specific project, but of the connected nature of all of them. He believes his work has made campus a more coherent, pedestrian friendly and accessible place.

During his time as university architect at K-State, Swanson encountered roadblocks. Swanson said the most difficult of all of his projects was actually one none of us could see.

“The most challenging project was when we decided to upgrade to a chilled water system,” Swanson said. “During that project we had to do construction through Mid-Campus Drive, all the way over to McCain, there were spots in Bosco Plaza. It was a 2.5 year project in sections.”

Swanson said this project was most difficult because it required so much work in popular areas and the results weren’t visible to the general public. Most people didn’t even know why they were having to change their route to class, or leave out of a different exit which made the communication of the project difficult, he explained.

Although Swanson has decided to depart from K-State, he said his experience here was overall a positive one. Swanson notably enjoyed the people that he worked alongside.

The architect in Swanson also loved K-State for its historical core and signature limestone. Swanson felt that what made K-State most unique was the way that its historic core could make such a large school feel close and walkable.

Swanson has decided to take a new leadership decision with the University of Nebraska as associate vice president for facilities planning and capital construction. The new position grants him greater leadership opportunities, he said.

Swanson’s return to Nebraska is a special one, as he was born in central Nebraska. This move places himself, his wife and his children closer to family. His departure however, is still bittersweet.

In a letter to his staff, Swanson explains how important his experience at K-State was to him.

“At the end of the day, place will always matter and K-State is truly a special place because of each of you,” he said. 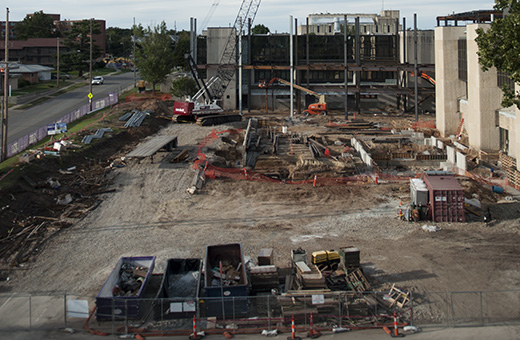 K-State engineering students look forward to the end of construction