Have you ever wondered what happens to whatever you drop in one of the little blue receptacles on campus?

Bill Spiegel, supervisor of the Recycling Center, has all the answers.

Spiegel has accomplished this by implementing ‘one stop drop’ receptacles around campus where students can recycle plastics No. 1-7, paper, newspaper, magazines and aluminum/tin cans.

When the program made the switch to one stop drop in 2013, volume exploded. The program manages the sheer amount of recyclables with the help of Fort Riley’s recycling facility, which has been around for about three years.

“We take ours to Fort Riley loose in our trucks that we have out there, and they separate it because they have a machine with people that separate it,” Spiegel said.

“I have a good relationship with Fort Riley,” Spiegel said. “We’re very fortunate because we don’t have to pay to get rid of it.”

Cost remains one of the main barriers to recycling.

As countries in recent years have stopped accepting the United State’s recycling exports, the demand for recycled materials has decreased.

“That affected everybody, not just K-State but across the whole nation. Before, the market was real great,” Spiegel said, “About two years ago, the market started going down a bit.

“[Fort Riley] used to take a lot more people, but they downsized a little bit, too, from the market,” Spiegel said. “They said ‘Well Bill, since you were the very first customer from two and a half years ago, we’re going to keep you, as long as your [product] stays clean.'”

Centers prefer materials to be as clean and free from contaminants as possible. K-State’s is roughly 85 percent clean, which Spiegel said is still really good.

However, Spiegel said the main offender when it comes to ruining recycling is usually food contamination.

“If it has food in it, we just don’t even want it,” Spiegel said.

However, food waste still has a role to play at the Recycling Center. The extra food that gets thrown away from the dining halls also finds a home thanks to Spiegel.

The Recycling Center works with Housing and Dining and Throckmorton to compost both food waste and soil from the greenhouses. For composting, however, the goal is to reduce rather than increase the amount.

“We don’t want a lot of high numbers in compost, because that means a lot of food waste,” Spiegel said.

Spiegel said the goal is to reuse, repurpose and recycle as much as possible so K-State doesn’t pay for it down the road.

“We’ve come a long way,” Spiegel said. “Some universities say they’re zero waste. It’s hard to be zero waste because everything is not recyclable.” 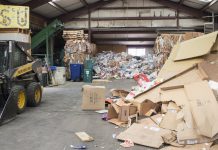 K-State leads Big 12 in recycling for fifth year of the...