Hayes was arrested for driving under the influence of drugs/alcohol at 9:55 p.m. on Feb. 29. Hayes signed with Kansas State in December and began classes in January. He joined the team for their spring practices.

Allen was also arrested for driving under the influence of drugs/alcohol with bond set at $1,500. Allen is a walk-on player from Overland Park and saw action in all 13 games last season.

K-State Athletics was not available for a statement at the time of publishing.

Skylar Thompson out for season after undergoing “upper-body” surgery 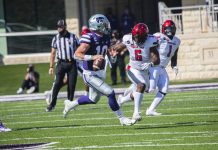