Due to growing concerns about the novel coronavirus, Washburn University enforced travels restrictions for students studying abroad. While the president of the university, Jerry Farley, said there is no threat, there are procedures in place.

“As far as the novel coronavirus is concerned, we have been following the recommendations of the Centers for Disease Control and Prevention as well as the state of Kansas and the Shawnee County Health Department,” Farley said, in an email to students and staff.

Nine people in Washington state have died due to the coronavirus. This includes two people in the Seattle area, according to NPR.

“The posthumous diagnoses means the pair — a woman in her 80s and a man in his 50s — were likely the first in the U.S. to die from the disease. They both died on Feb. 26,” NPR reported.

A bill forbidding ownership of wolves and primates was introduced to Kansas lawmakers.

“The bill was introduced by the Humane Society of America and PETA, a law they have been trying to legislate for the past six years,” according to KSNT.

Rep. John Barker (R-Abilene), chair of the House committee overseeing the bill, said he would consider hearing it, but doesn’t anticipate doing so this year. While the Humane Society of America and PETA have been pushing for the bill for six years, it has yet to be heard. 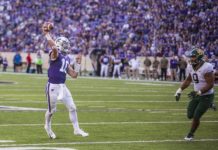