The women’s basketball team got its revenge against the Oklahoma State Cowgirls, 62-52, in Stillwater, Oklahoma, Tuesday night, after a loss at home earlier this season.

It wasn’t the most flashy win, but Kansas State found success behind the three-point line and the free-throw line, making up for the 15 turnovers the Wildcats committed.

ANALYSIS: Women's basketball gets a taste of their own medicine in loss to Baylor

It was a well-fought, closely-contested game heading into the fourth quarter. At the end of the second quarter, Oklahoma State was up 29-24, but the Wildcats came back swinging. Kansas State fought back in the third quarter, tying the score back up less than three minutes into the quarter.

The Wildcats went on to finish the game strong, and securing the game with a layup from Harris and free throws to defeat the Cowgirls 62-52.

The Wildcats scored 38 points in the second half, holding Oklahoma State to just 23.

K-State finished the game strong, shutting down every comeback attempt put up by the Cowgirls.

The Wildcats improved to 15-13 on the season, and improved to a winning record in conference play at 9-8.

With one game remaining against in-state rival Kansas in Bramlage Coliseum on Sunday, K-State will look to complete the season sweep. The Wildcats have secured a winning overall record in the regular season, and are promised at least an even record in Big 12 Conference play.

K-State tips off against the Jayhawks at 2 p.m. on Sunday afternoon. 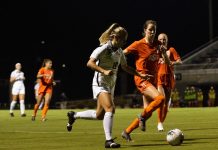 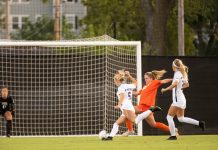 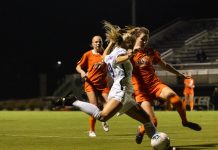 K-State soccer prepares to bounce back from season opener loss

Women’s basketball comes up short against No. 23 Arkansas