Senior forward Xavier Sneed led the Kansas State Wildcats to a 79-63 win over the Iowa State Cyclones in the final home game of the regular season March 7 in Bramlage Coliseum. After a loss to Oklahoma State on Wednesday night, the Wildcats entered the matchup looking to end a ten-game losing streak.

Sneed took over the regular-season finale with career-high 31 points, including 26 in the first half alone. Sneed was red-hot, and when asked about when he knew that he was shooting well, he said, “Probably after the second shot.”

Senior forward Pierson McAtee had his first start at K-State and tied his career-high with six points and led the team with five rebounds in 25 minutes. Senior forward Makol Mawien was limited with foul trouble and unfortunately fouled out.

Iowa State experienced similar issues as the Wildcats this season and were also seeking to end a skid. The Cyclones will be the No.9 seed in the Big 12 tournament looking to gain momentum for a run .

K-State started off strong in the first half shooting 70 percent from the floor to take an early lead. The Wildcats lead 41-23 heading into the half.

Sneed dominated in the first half going 8-11 from the floor and a perfect 6-for-6 from the line to pass his career-high with 26 points before the break.

“X had the special first half; some of them weren’t great shots, but he was in a heat check, and he made them,” Bruce Weber said. “It’s a great finish for his Bramlage career.”

K-State shot 52 percent from the floor and scored the most points in the first half since dropping 42 against West Virginia in January.

Iowa State struggled from the floor out of the gate, shooting 25 percent from the floor but had success from the line going 11-13. Junior forward Solomon Young led the Cyclones with 11 points.

Foul trouble was crucial for the Wildcats in the first half. Mawien finished the half with three, and junior forward Levi Stockard and freshman forward Antonio Gordon each had two. The Cyclones reached the bonus with over ten minutes remaining in the half and shot 85 percent from the line.

Iowa State shot 48 percent from the floor in the second half and outscored the Wildcats 40-38, but the hot start for K-State eliminated chances of a comeback.

The Cyclones struggled to shoot for threes, going only 2-21 behind the arc. Solomon Young finished with 17 points for Iowa State

K-State finished shooting 52 percent from the floor and 31 percent from three led by a scoring flurry by Sneed. The Wildcats forced 19 turnovers and scored 25 points from them.

A win heading into the Big 12 tournament gives the Wildcats some momentum after a long stretch of losses.

“It definitely means something for us right now, just to get one back in the win column for us, just get that momentum going,” Sneed said.

K-State will play the No.7 seed in the Big 12 tournament in Kansas City on Wednesday, and tip-off is scheduled for 8 p.m. on ESPNU. 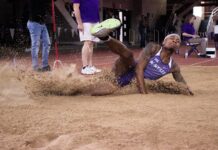 Ranked K-State jumps to third in the Big 12, Oklahoma remains...