Before the COVID-19 pandemic limited access to campus, K-State Choirs were working on a performance called “Considering Matthew Shepard” that would’ve taken place in May. All choral performances, including this one, were canceled.

Matthew Shepard, a gay student from the University of Wyoming in Laramie, was beaten and left for dead in 1998.

“We’re all pretty heartbroken, because the ‘Considering Matthew Shepard’ concert was going to be really powerful,” said Kolby Van Camp, member of concert choir and junior in music education and music composition.

While Abigaile Molzer, member of University Treble Choir and senior in anthropology, believes the right decision was made to call off the performances, she said she’s heartbroken that her last semester of choir was cut short.

Molzer said she’s been involved since her freshman year and is known as “choir mom.” She said the last time she saw the members of her “choir family,” there were a lot of half-hearted goodbyes such as “I’ll see you after spring break.”

“People are struggling because, I know for me, choir was part of my emotional well-being, the way I kept myself mentally well and 100 percent able to commit to school.” Molzer said. “I think students are worried that you’re not going to have that social, mental release.”

Julie Yu, professor of music and co-director of choral studies, said via email that student safety is the top priority and concern right now.

“Music making and music consumption continues to happen — it’s just happening individually and in more creative ways,” Yu said. “We certainly look forward to times to be able to make music in the same acoustical space, but that can certainly wait until it’s safe to do so.”

Despite the sadness, Van Camp said when Kansas State shut down, his first inclination was that they didn’t need to stop making music together.

Along with Spencer Pope, member of concert choir and sophomore in music education, Van Camp is working to create a virtual choir video. He plans to make a conducting track, send it to those who sign up to be a part of the project, and have them record their parts from home.

“I will create a conducting track, and there’s a technique that you can use with a beep at the beginning of the track, and once you line all of the beeps up and all of the videos are submitted, then the piece will be in time with itself,” Van Camp said.

Originally a computer science major, Pope does social media for the choir and sound engineering for the In-A-Chord A cappella group. While Van Camp is working on getting the seven voice parts together, Pope will do the technical side of the project, using Adobe software.

“I will basically get all of the recordings that people send in, and then edit it all together,” Pope said.

The piece Van Camp chose is “The Road Home” by Stephen Paulus, which he said was appropriate as they have all lost a mutual experience for the semester.

“The text has a really powerful message about going home and finding what you’ve lost,” Van Camp said.

On Sunday, they had over 40 people who had expressed interest in doing the virtual choir, the limit being 50. They want to have the project up on YouTube by mid-May.

Since the cancellation of choir activities, the “choir family” has still been in contact. 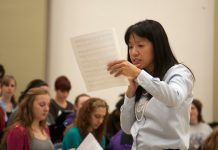 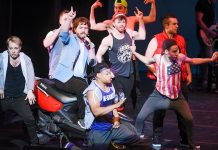 K-State Singers not cut from budget