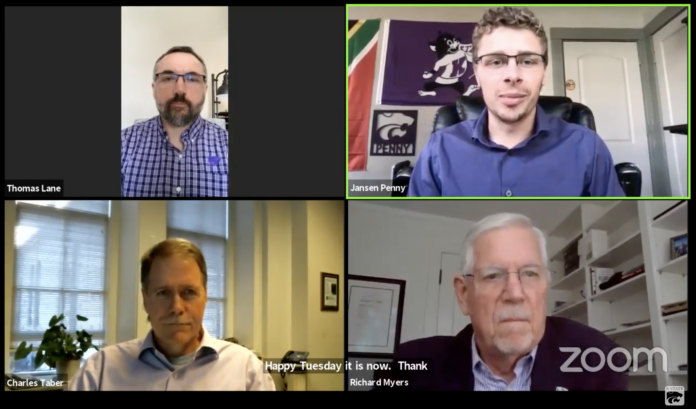 In a virtual town hall on Tuesday afternoon, Provost Charles Taber said the university will be giving students the option to use an A/pass/fail grading system.

“We’ve really been trying to think about how we can relieve some of that pressure on students,” Taber said. “One of the decisions that we’ve been thinking about really for the last week — and we’ve been consulting students, faculty academic staff, our faculty senate and governance systems, other universities, KBOR — this has been the issue of pass/fail, our grading policy for the semester, and we have decided … that we are going to extend the option of the A/pass/fail.”

Taber said that students would be able to pick what classes they want to use the system for, if any. He stressed that students should consult their academic advisers prior to choosing the option.

“If you’re considering taking this — and remember you have until the end of the semester to make this decision so it would not be wise to jump on it right away — you need to take some time and see where you stand and talk to your adviser and make sure that it’s the right decision for you,” Taber said.

Students will have until May 8 to chose whether they want to make use of the A/pass/fail option. These options are available to students on all Kansas State campuses.

It was not discussed how these options would impact students’ Grade Point Averages.

One of the first questions asked regarded the Privilege Fee and the possibility of a partial refund. Lane said they decided not to give a refund for several reasons.

“The first one is that, for example the Union and Rec Center have bond obligations that they need to make payments on, just like folks might have a mortgage to pay on their house — those payments have got to be made,” Lane said. “Utilities still have to be paid on those facilities, there’s equipment repair [and] equipment replacement that’s occurring in some of our program areas, we have contracts that we have for the spring that are going to be moved over to the fall and those need to be paid for.

“Also, we have student employees that are in both of those areas or throughout the privilege fee area, in addition to full time staff that are still being paid so those are all of the factors that went into that decision,” Lane continued.

Lane went on to say that housing and dining will likely be providing a prorated refund, though they are still working out the details. The refunds would go directly into the student’s KSIS account.

Lane discussed a potential refund for parking services as well.

Taber addressed questions about cancelling spring commencement. He said despite all the input they had, they wouldn’t possibly be able to accommodate all the different needs.

“We will be planning to do other forms of celebration. I know for example that the colleges are planning to do … some form of separate celebration for their graduates who are not able to attend the December commencement,” he said. “We don’t have anything solid for me to tell you now, but we are certainly aware of this issue and we’re going to try to … think of something that will be [a] really wonderful K-State celebration for everybody.”

Myers addressed concerns about construction going on around campus. The Morris Family Multicultural Center, for instance, will remain under construction, but the project could see delays. The same applies to Hale Library, he said.

Additionally, Lane said there are still 36 students who remain in the residence halls, and 25 of those students are international.

“Those were one of the few allowances that we provided in housing and dining for students to remain in the residence halls,” Lane said. “So it could have been an extreme financial hardship, an international student who may not be able to make it back home to their permanent home. It could also have been a domestic student who for whatever reason might have found themselves homeless, based upon the decision that we made to close the residence halls.”

Taber said the university has started making plans to extend online classes into the fall.

“Certainly we are starting to plan for that for that possibility,” Taber said. “And so … we would have a lot more time to ramp that up and so we would have the opportunity to really develop with the faculty their courses prior to that if that’s what we know is coming down the pike.”

Myers said he hoped to have the opportunity to do another town hall in the future.

“Nobody in the K-State family says no when we have a problem,” Myers said. “People pitch in to see how we can make things happen make it better for students for faculty for staff, whatever it is. We’ve got some hard times and hard decisions ahead of us.”