“These were all voluntary. And I gotta tell you, it’s really gratifying,” university president Richard Myers said. “We put a note out in the morning saying, ‘Here’s what we think we need to do,’ and by noon everybody signed up.”

Myers said Weber and Klieman will be taking 13 percent pay cuts in the next fiscal year. All other staff making more than $150,000 will take a ten percent cut and anyone making between $100,000 and $150,000 will see a five percent decrement to their salary.

Athletics is also cutting operating expenses by ten percent to save $2 million over the upcoming year, according to a press release.

“We are in the midst of such a unique time, and I sincerely appreciate our staff and coaches taking this situation in stride and showcasing strong leadership,” Athletics Director Gene Taylor said via the press release. “From revenue streams to competitions, a lot of unknowns remain ahead of us, and this reduction plan will allow us to focus on the needs of our programs and student-athletes.”

K-State Athletics will have to account for smaller-than-anticipated disbursements from the NCAA and the Big 12 Conference after the cancellation of the college basketball postseason and potential impacts on the football season this fall.

“We remain confident that the return to normalcy is ahead of us and appreciate all that our coaches, staff, student-athletes, fans and supporters have done to help us through this unprecedented period,” Taylor said.

These steps are similar to those taken by other athletics departments around the country, including Kansas and Iowa State who also announced cuts to budgets and payroll. 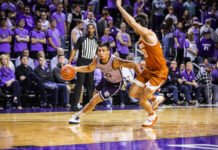