Editor’s note: This story was published in the Collegian as part of a partnership with the A.Q. Miller School of Journalism and Mass Communications. The Collegian, the independent voice of the student body, is also an educational tool that allows student journalists to get hands on experience. This story is a senior capstone project.

In places like Kansas City, Missouri, where nearly every night there used to be live concerts by local artists, the pandemic has been a bit of a culture shock. Statewide stay-at-home orders are beginning to expire, going to concerts, movies or any kind of nonessential gatherings are still off the table.

This new reality has forced local musicians to make a shift.

Allison Hawkins, local artist and member of the Kansas City-based band True Lions, said that when the stay-at-home order was issued her band immediately had five shows canceled. Since then, they have adjusted to the demands of social distancing by streaming concerts from their home.

“It was such a hit when the stay-at-home order was issued because it’s such a part of my daily life to go to shows — every other day I would go to shows,” Hawkins said. “So I was really inspired by other people doing live streaming of concerts.”

So in their practice room filled with Christmas lights, strobe lights and XLR cords on the wall, they welcomed the virtual audience to their streamed concert on Facebook and Instagram Live.

“Performing a streamed show was more involved than I thought it would be — it’s not just turning FaceTime on,” Hawkins said. “We had different amplified sounds when playing with electric instruments coming from different directions in the room. So we made a test stream and we had to put dirty laundry on the drums to muffle them. We had our own sound check like a normal show would have.”

Performing another streamed show is something Hawkins said the band might do. After all, they found it to be a more accessible way for people in other cities to watch the show. The ability to pop in and out during the set with no cover fee means that anyone can watch them play.

“I still want our music to exist in real time,” Hawkins said. “We have recordings, but I feel most present in the scene when I’m playing gigs, and putting myself out there. And I think for True Lions to survive we have to live stream because that’s the world we’re living in, and we don’t want the music to die.”

The do-it-yourself music scene has not stuck to just streaming concerts online. They have also turned to raising money for local service industry workers, and venues who host musicians. Manor Records, a Kansas City based record label, raised over $800 in one week by creating a digital album of local artists performing covers of songs called Keep the Change.

“The Keep the Change fundraiser started with just video chatting with my Manor team about what we could do to help right now, because a lot of local musicians work in the service industry and have lost their jobs,” Shaun Crowley, founder of Manor Records, said. “So we thought, ‘How can we give back, and how could we do that without any shows happening?’ And a digital compilation album of local artists doing covers is what came of it.”

“It started off pretty crazy, that first day so many people were donating so much more than the set amount,” Crowley said. “It’s just the fact that we’re all able to sit in our homes and raise money is really cool. That’s where it’s like, no matter what we do we know we’re helping.”

Manor Records team member Wayne Moots worked alongside Crowley on the process of putting together the album.

“I think the biggest challenge for everyone was finding out how to record this music at home in a quality enough way, obviously not everyone has access to recording equipment,” Moots said. “So I know some artists who recorded their audio in the voice memos on their phones and just emailed that to us, which is kind of nice because it brings Manor Records back to our DIY foundation.”

This was not the last initiative that Manor Records sets out to do to keep the music community connected. They released a small-circulation self-published magazine, Manor-Zine, with features of local artists and coloring pages representing iconic music venues.

“I’m not a musician myself, but I want to be able to continue to give these people a platform to be able to share their art,” Moots said. “So it’s kind of interesting to be able to figure out new ways to help people who have helped us in the past. Plus, these are our friends and neighbors. These are people I have seen at the bars for like six years now, I want to help them.” 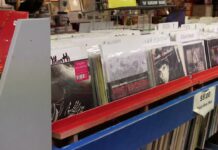