Home Culture Feature To bridge the gap between online and in-person classes, a professor dug...

After classes were forced to an online format, some professors needed to get extra creative to teach their students the class material.

For DeAnn Presley, professor of agronomy, this transition led to a challenge since her classes on soil classification and soil judging are naturally very hands-on. To get around the lack of classroom instruction, Presley dug a 12-foot soil pit in her backyard.

Presley used her camera to record herself while she was looking at the elements of the soil and described it for her students. The soil she had easy access to had many different examples and properties that are commonly seen, especially in Kansas.

“I just rambled on the camera ‘OK, so I’m seeing this’ and I would have the camera pointed at me from an angle, but when I wanted to show them something close up, I’d come in with it,” Presley said.

While her students enjoyed the in-person version of the class more because they could see the soil pits for themselves, they knew this situation was better than nothing.

“The comments that I got back were like ‘It was the best we had for what we had to work with’ especially with a week or two of notice,” Presley said. “I think all of us just adapted to that. I feel bad for the students; I wish students could have gotten their full experience in all of their classes — not just mine.”

She also wanted to make sure students knew they could use these videos as a resource in the future if they needed.

“I put these on YouTube so they can refer back to them whenever,” Presley said. “They’re going to go into a lot of different jobs, so I don’t know how many times they’ll dig soil pits, but this is something they can go back to.”

Presley already has thoughts and plans in place about what she would do differently, depending on whether classes are in-person or remain online.

“If I have to teach this online again, I will collect samples and physically mail them soil,” Presley said. “I will figure out a way to make that happen. That’ll be a little pricey, but it’s not unmanageable.”

Despite the challenge of adapting to an online format with a very hands-on class, Presley enjoyed having her own learning opportunity with digging the soil pit.

“It was a good experience for me too,” Presley said. “For digging the soil pit in my backyard, it was the first time I had actually done it, so I wanted to have that experience. It was ugly, but it was mine and it was fun to do and I learned a lot.” 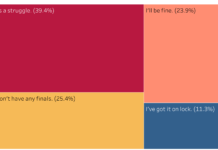 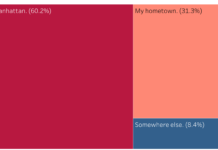 Twitter Poll: Where are you attending online dead week and finals week from?