Since March 12, volunteers from the Kansas Wing of the Civil Air Patrol have been assisting in various capacities to alleviate some of the stress on state agencies by helping provide Kansans with personal protective equipment, transporting COVID-19 specimens and test kits.

“Seeing our volunteers coming together to serve their communities has been phenomenal,” Col. Linette Lahan said in a press release. “Members from across the state have answered the call to serve, and our wing stands ready to support.”

Previously, the Kansas Wing has assisted with many other efforts, including the flooding in the Manhattan community last year. However, the scale of this is unlike anything they’ve ever seen, First Lt. Col. Cole Oakland, public information officer for the Kansas Wing, said.

“I don’t think this is anything that any of us have ever seen,” Oakland said. “This is such a large-scale event that’s really gone on for a long time, so as volunteers, I think it’s amazing for us to be able to participate in this and see how we can support our fellow people.”

One of the biggest responsibilities for the Civil Air Patrol has been ensuring timely transport of COVID-19 specimens, such as completed test kits, to the State Emergency Operation Center for results.

“There’s a lot of different, smaller hospitals that, when they were doing the tests, everything was being sent to the state for testing, so it was easiest for the Civil Air Patrol to provide personnel and vehicles to transport specimens from the father-out places to the state lab,” Oakland said. “For Kansas City, it’s pretty easy to just jump over to Topeka, but the farther west and more rural areas, we’ve been doing a lot of that.”

“It’s been pretty important that [rural hospitals] get that material to be able to function and provide care and it reduces the strain on some of the state agencies,” Oakland said. “They’re so busy doing a bunch of different roles, so we’re able to step in and assist them with some of the minor transportation stuff that they need done.”

On April 4 and 5, volunteers from the Civil Air Patrol teamed up with the Kansas National Guard to disburse resources from Kansas’ allocation of the national stockpile to all 105 Kansas counties.

“Our members are traveling throughout the state, touching all four corners to deliver supplies to the counties,” Lt. Col. Doug Dutton said in a press release. “We have members from every Kansas squadron supporting COVID relief-related missions.” 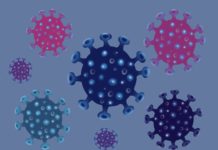 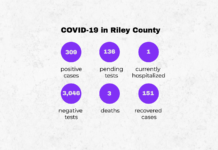 TAKE A LOOK: COVID-19 in Riley County by the numbers on July 6 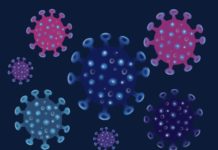