The department of grain science and industry plans to operate the Hal Ross Flour Mill starting June 18 and donate the flour produced to the community.

The Hal Ross Flour Mill sits north of the Bill Snyder Family Stadium on Agriculture Road, and is a long standing but often overlooked landmark on the Kansas State campus.

The mill is run by faculty and students within the department of grain science and industry. Gordon Smith, professor and department head, is one of the individuals who runs the facility. Amidst the COVID-19 crisis, Smith and his colleagues put their heads together to establish a way in which their department could use their resources to help others.

As someone in the business of making food for people, Smith was most alarmed by the fact that some stores were so poorly stocked that people were not even able to buy flour.

“It didn’t take a rocket scientist to look around and say ‘OK, we have a flour mill, we have the ability to run the flour mill with very few people,’” Smith said. “We have the people who can run the mill, we have local farmers and the Kansas Wheat Commission who can help us get wheat donated. So we went to the President, the Provost and the dean, and said ‘We have this asset, we would love to use it.’”

The department had originally hoped to run the mill and get out the donations in mid-March, but were concerned that an incident or injury at the mill could add more stress to the healthcare system.

The mill will be run by four professors, along with Smith himself. The flour produced will be given out purely on a donation basis in an effort to simply give back to the community.

People in need of flour are encouraged to stop by the Grain Science Center off of Kimball Road on Thursday, June 18. Donations will be handed out from 3 p.m. to 7 p.m..

“[We are] really trying to help the local community because it is the right thing to do with the assets and talents that we have,” said Smith. “This is just an opportunity to take our expertise and give back in a time where it seems to be appropriate.” 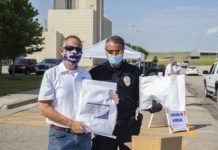 ‘We had the time to do a right’: Successful flour distribution could lead the way for future events 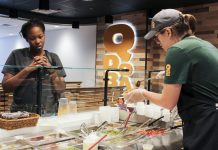 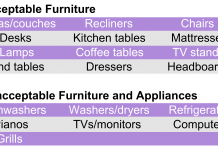 ‘We had the time to do a right’: Successful flour distribution...