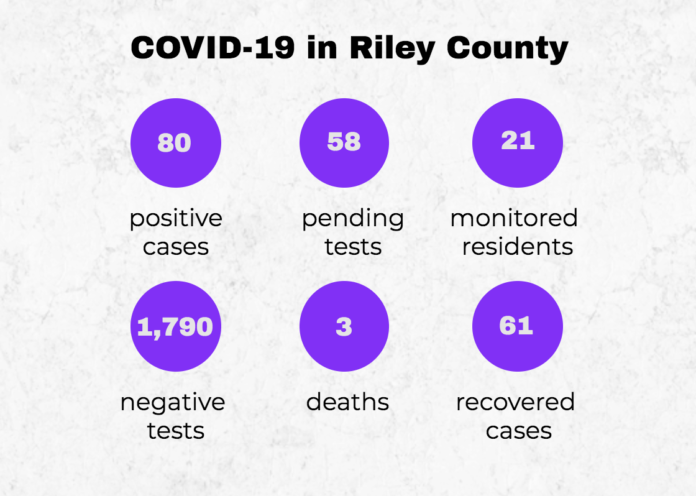 “Young people are not immune to the disease,” emergency preparedness coordinator for public health Andrew Adams said in a press release. “We all need to take personal responsibility for the health and safety of our community by following good hygiene practices and limiting contact with the public. This could be the new normal for a long time to come. The old way of doing things is gone, at least for now.”

Additionally, 61 of those who previously tested positive are considered to be recovered. There are 16 active cases in the county.

“Riley County is trending upward overall, and most of the new patients are between the ages of 18-34,” a health department press release said.

One resident is hospitalized at Ascension Via Christi and is on a ventilator. There is an additional patient with COVID-19-like symptoms.

Riley County has documented three COVID-19-related deaths. The first death was recorded last month. The second was announced last Tuesday after a man in his late 80s died after testing positive for the novel coronavirus over the weekend. The most recent death was announced last Wednesday after a 61-year-old man died from complications related to COVID-19. He had been on a ventilator for a week, a press release says. The most recent deaths were both associated with an outbreak at an extended care facility in Leonardville, a press release said.

At this time, there have been 1,790 negative tests administered in the county and 58 tests are pending. There are 21 people actively being monitored for possible exposure.

Students struggle to keep up without spring break, feel burnt out