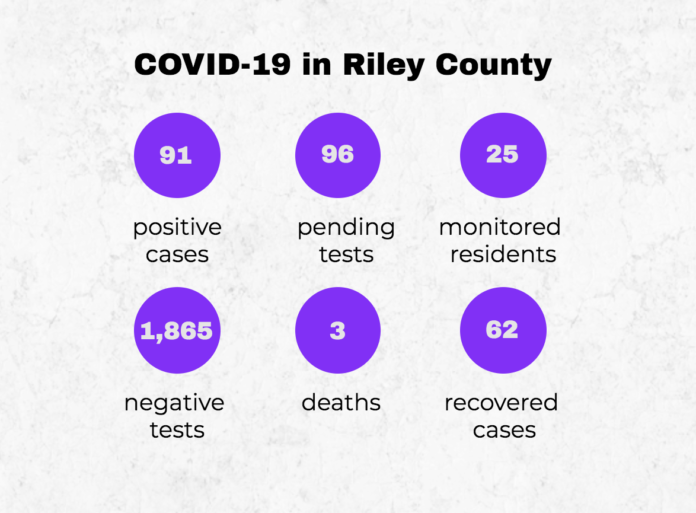 The Riley County Health Department reported 11 new cases of COVID-19 on Wednesday, bringing the local case total to 91. This is the largest local spike in cases documented since the start of the pandemic.

Six of the new cases are in Kansas State athletes.

Additionally, 62 of those who previously tested positive are considered to be recovered. There are 26 active cases in the county.

“Riley County is trending upward overall, and most of the new patients are between the ages of 18-34,” a health department press release said previously.

Riley County has documented three COVID-19-related deaths. The first death was recorded last month. The second was announced last Tuesday after a man in his late 80s died. He tested positive for the novel coronavirus the previous weekend. The most recent death was announced last Wednesday after a 61-year-old man died from complications related to COVID-19. He had been on a ventilator for a week, a press release says.

The most recent deaths were both associated with an outbreak at an extended care facility in Leonardville, a press release said.

At this time, there have been 1,865 negative tests administered in the county and 96 tests are pending. There are 25 people actively being monitored for possible exposure.