Like generations of athletes before them, some Kansas State athletes are using their positions of prominence to take a stance for social change. Beyond Manhattan, they have their sights set on taking part in the growing Black Lives Matter movement.

After George Floyd was killed by ex-Minneapolis police officers on Memorial Day, protests sprung up across the United States. Now halfway through June, these protests continue as people ask for police reform.

Growing up in the Minneapolis area, Carr was heartbroken when she saw the video of Floyd’s death just outside of Cup Foods, a store Carr frequented while living in the area.

Days later Carr was protesting outside the statehouse in Topeka. While reluctant to speak out at first, Carr soon found herself in the middle of the protest, leading chants.

“I decided since I can yell loud on a basketball court I might as well use it for something else too,” Carr said. “So I started chanting and people started following along and that’s where I really felt like I found my voice.”

Use your voice. Use your platform. They will hear us!! NO JUSTICE NO PEACE. pic.twitter.com/p84Z1bWcYS

Carr was not the only K-State athlete using their platform to speak out. Senior running back Harry Trotter, alongside senior defensive backs AJ Parker and Jonathan Alexander, joined the protests in Manhattan on June 2.

I stand with my brothers 🖤#BlackLivesMatter pic.twitter.com/5IX2jAEHyn

“I’ve had so many African American friends and I’ve been so tied in with them, it really made me feel for them,” Trotter said. “I thought that it was important to go and support them and just let them know that no matter what, I am on their side and I am fighting for them.”

As student athletes have used their platforms to speak out, some coaches have done the same.

Mittie said he has been “proud and strengthened by our student athletes at K-State.”

Klieman said he wants “all of our players, and our black athletes in particular, to know we are here for them and we are here to listen and help.”

K-STATE is family, we stand together pic.twitter.com/UVQvxDQx5w

“[The coaching staff] said that they support us in everything that we do and say, and I think that was important for us to hear,” Trotter said. “We have such a supportive coaching staff, guys that are always behind us 100%.”

Athletes have used social media to speak out on the issue, with one particular post going viral. Carr wanted to make sure her voice was truly heard.

This tweet garnered national attention, currently sitting at over 7,000 likes and over 1,000 retweets, as well as getting support from the NCAA Women’s Basketball Twitter account. With the attention, Carr received both positive and negative reactions to the tweet.

“I felt supported by so many people here at K-State that I didn’t even know I had their support,” Carr said. “It also kind of hurt me a little bit just to see how many people are just very small-minded about things. I got threats in my DM’s, I got threats on Instagram, and there were people saying that they don’t even know who I am.”

Her response to the hate?

Simple, those that viewed the tweet know who she is now, and hopefully, she said, she might help them change their mind on the subject matter. 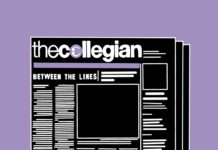 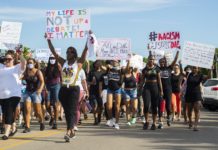 People in protest: Organizers and community members speak out against racism,...