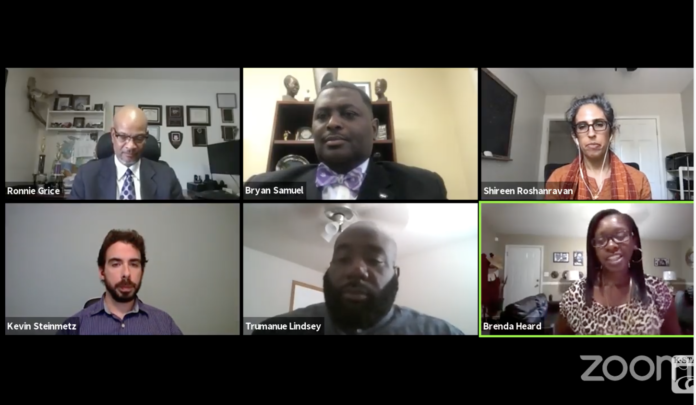 The movement was recently catapulted back to national attention following the police-involved killing of George Floyd nearly a month ago in Minneapolis. Since his death, protests have spread across the United States calling for the end of police brutality and overarching police reform.

Trumanue Lindsey, director of diversity and multicultural student life, characterized the movement as a “cry for help.” It’s not that all lives don’t matter, it’s that the sanctity of black lives has been devalued.

“We have been dehumanized,” Lindsey said. “We’re not seen as a whole person.”

“This isn’t new to me,” Heard said. “I recognize racism on campus.”

She said she’s received a number of apologies from white peers following the outcry on social media and protests for systemic change, but she said she hasn’t felt “moved” by them.

“I appreciate that they’re announcing their solidarity, but that fact that a black person had to lose their life makes their solidarity questionable,” Heard said. “I’m annoyed.”

“Put your money where your mouth is,” Roshanravan said.

Allyship is more than just asking students of color to educate you on their hardships, Lindsey and Beard said.

“This is not something that should be shouldered by our black colleagues and our other colleagues of color,” Kevin Steinmetz, associate professor of sociology, said.

In the last few years, Kansas State has hit the news for a number of racially charged incidents on campus. In 2017, tensions reached a tipping point and eventually led to the creation of KSUnite.

Recently, the Black Student Union launched a social media campaign called #BlackAtKState that allowed black students and alumni to share their stories of discrimination, microaggressions and other barriers they’ve faced on campus. More than a hundred tweets were sent using the hashtag.

Words mean nothing until there are actions, Heard said. Even then, she’s still concerned to return to campus in the fall because of a lack of support for students of color. One specific issue she mentioned was the university’s desire to balance freedom of speech and the principles of community at the expense of the safety of students of color.

Nationally, as the video that kicked off the panel showed, several black men and women have been killed at the hands of police and community law enforcement officers in the last decade or so.

“[The Black Lives Matter] is the manifestation of work for centuries,” Roshanravan said.

Roshanravan said to see how law enforcement in the U.S. became discriminatory, you have to look at the history of law and order. For much of the nation’s history, the penal code was a way to control black lives, she said, whether that’s through slavery or Jim Crow laws.

The mindset of “systemic oppression” has been carried in policing — maybe unconsciously — through the history of the U.S., Lindsey agreed.

“When we think about what constitutes crime … we think about how institutions … have actively been abandoning particular communities,” Roshanravan said. “At the end of the day, we have to grapple with internalized anti-blackness.”

One of the key requests of protesters has been the defunding of police. Steinmetz said that request isn’t equivalent to disbanding police, but instead means not treating police departments as the end all, be all solution to any social issue that arises. Instead, Steinmetz said, mental health care professionals and social workers might be involved more.

In the past, police reforms haven’t stuck because they didn’t get to the roots of the problem, Steinmetz said, and nothing will until “police culture” is addressed.

“It absolutely starts from the beginning, from the ground up,” Steinmetz said.

A few years ago, a black student accused a campus police officer of dismissing his claims of harassment. That officer retired later that academic year following an internal investigation.

The next CATs panel will be about COVID-19 and the impacts of the pandemic on different communities. The moderator, panelists and date for this virtual event are uncertain, Samuel said, but it should take place some time in July.