Home Featured Home ‘We had the time to do a right’: Successful flour distribution could...

Faculty in the department of grain science and industry and a K-State police officer passed out more than 1,000 bags of flour to members of the Manhattan community at the Hal Ross Flour Mill on Thursday.

All of the resources used in the production of the flour from the grain to the mill are owned by the university, which kept the cost to a minimum and allowed them to produce massive amounts quickly.

“We’ve given away 10,000 pounds of flour already today, so you know there’s obviously demand,” Gordon Smith, head of the department of grain science and industry, said.

The flour itself is the same as what you’d find in your local grocery store — the only difference is that it is packaged on site in university bags. The majority of the mill process is automated, with the exception of packing the flour into the bags.

“It was ground from wheat two weeks ago,” Smith said. “So it’s fresh, it’s really fresh and good, some of the best we’ve ever made here. We had the time to do a right.”

The mill typically runs two to three times a week during the school year, and is used for research purposes during the summer. However, it hasn’t run in the past 10 weeks, Smith said. This was initially a concern — since mills are built to run for hours on end, problems can arise when it sits for long periods of time unused.

‘It is the right thing to do’: Campus mill set to reopen in order to donate flour to people in need

“This gave us a chance to kind of work out the bugs and get it running again before the students came back, so it really served a dual purpose,” Smith said.

“We sat with the senior administration, the president and the provost, and talked to them about if they were in support of trying again, the faculty is willing to do it,” Smith said. “There are certainly people within the states who want to take the product.”

A flood of people attended the drive-thru flour event, and there were even calls from people in western Kansas, where flour could be in low supply at local supermarkets.

“It was a way that we could use the talents and resources that we have to give something back,” Smith said. 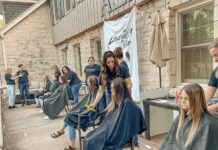 Check out the charity before you give this season