Public information officer of the K-State Police Department Bradli Millington said that the switch from LiveSafe to Rave Guardian should bring minor changes.

The biggest difference between the apps was the Guardian app’s compatibility with the K-State Police Department email alert system.

“[Rave Guardian] is linked to the same company that runs our alerts for the campus, the ones that we send out our mass notifications on,” Millington said. “So this is that company, so it’ll be a lot easier to get, say for instance we send out a tornado warning on campus, this will automatically pick that up and send it out through the app too. It combines it into one system so we’re able to get a lot more out.”

The switch was made primarily for budgetary reasons.

“One of the big motivating factors behind the switch was the price of LiveSafe,” Millington said. “We were on the ground floor when it first came out and it was a fairly reasonable cost. We got a one year extension on it and then it was going up considerably. So much that it wasn’t feasible in these times to keep funding that. The Guardian side was a lot more cost-effective and we got some good benefits from it.”

Millington said that usage of the safety apps by students is low, and they are hoping that more students will get more on board. He emphasized that the app can be very useful for students in several ways.

“It’s monitored 24/7 by us down at dispatch just like a phone call,” Millington said. “It’s a good source if you can’t make a phone call, there’s an app and no one knows what you’re doing.”

He advises people to download the app when they come back in the fall, look it over, look at the options and use it. 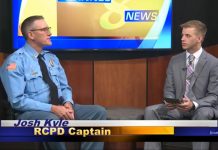