Home Featured Home TAKE A LOOK: COVID-19 in Riley County by the numbers on July... 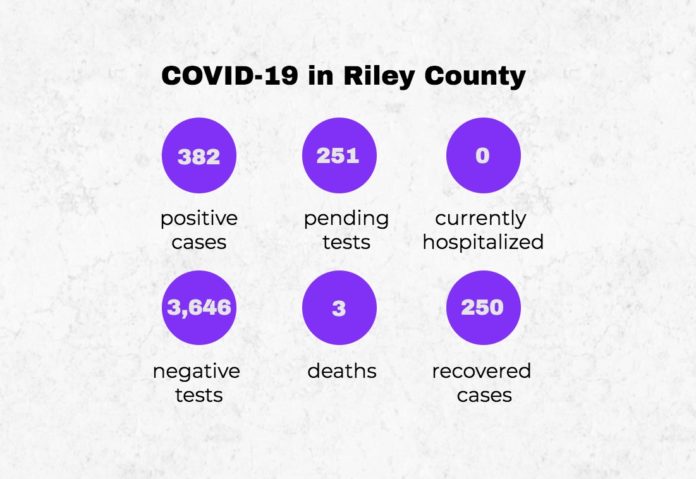 Additionally, 250 of those who previously tested positive are considered to be recovered — an addition of 18 recoveries since Wednesday. There are 129 active cases in the county.

Riley County has documented three COVID-19-related deaths. The two most recent deaths were both associated with an outbreak at an extended care facility in Leonardville.

The state and local health department have declared a new outbreak at Meadowlark Hills in Manhattan after eight people — staff and residents — tested positive. One of these positive cases is in a nonresident of Riley County, a press release says.

“The majority of residents who tested positive are asymptomatic and were tested after being identified as having an exposure to a positive case,” the press release says.

At this time, there have been 3,646 negative tests administered in the county and 251 tests are pending.

Currently, there are no people who have tested positive for the novel coronavirus hospitalized, but there are five people with possible cases currently being treated at Ascension Via Christi.