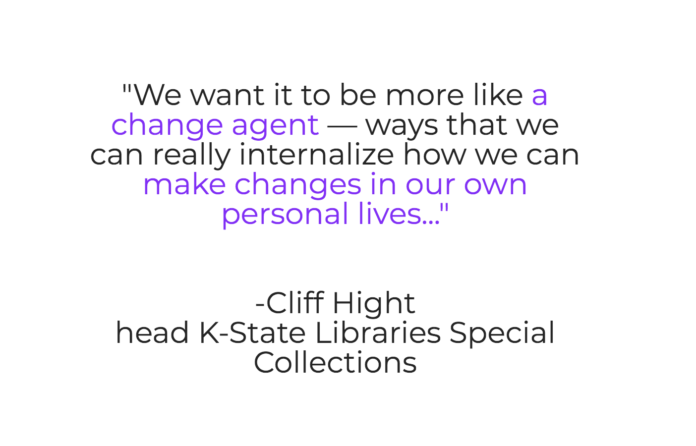 This fall, Kansas State will see the implementation of anti-racist learning communities on campus. Hosted via Zoom, the experience will be guided by the novel “How to Be an Antiracist” by Ibram Kendi.

Kimathi Choma, assistant dean of diversity, recruitment and retention for the College of Arts and Sciences; Jessica Elmore, associate director of diversity programs for the K-State alumni association; and Cliff Hight, department head of the Morse Department of Special Collections for K-State Libraries will host these communities.

Elmore said that talking about anti-racism can be personal and these communities provide a more intimate setting for individuals to traverse that journey with others.

“These are just small pods of people who want to do this together — so if it’s a unit that wants to do this together or a particular community, things like that,” Elmore said. “We’re able to kind of give them some structure, as in the progression of how we’re going to go through the book, but they have the ability to kind of share their own personal story and journeys, without feeling like it’s 100 people hearing them talk about how they mistakenly assume this or whatever that is. That’s what the learning community is about — is trying to create a small community feel so that people can talk about their own personal journey as we all try to be more anti-racist.”

Choma said anti-racism is a process that he believes can be done better in a community.

“So we started this a long time ago with [Kendi’s] first book … ‘Stamped From The Beginning’ — and we did that on a much smaller level with people that were willing to join in with Black Faculty and Staff Alliance and now we’re looking — with all this going on in the world — looking university-wide, and we’re excited about the amount of people who have decided they want to come alongside and be part of this journey that I believe all of K-State needs to go on together,” Choma said.

Elmore said that the new book by Kendi provided an opportunity to do a “part two” of their personal discussions they’d had with the non-fiction book “Stamped From the Beginning.” She said they decided to expand the idea and use the resources all three of them have to further develop it.

Hight said as he thought about their experience with their book club for Kendi’s first book, he remembered that they realized they didn’t just want it to be a book club experience.

“We want it to be more like a change agent — ways that we can really internalize, how we can make changes in our own personal lives and then look at institutionally how we can, in our spheres of influence, affect the institution to reflect some of those changes that need to occur,” Hight said.

Elmore said she plays a role in the content, development and structure of the groups, and the rest of the team brings other skills and abilities to the table.

“Dr. Choma’s very much in the academic space and we all know being at an institution of higher learning that it’s really important for buy-in, for validity, for connections, for being able to make sure that we are providing, you know, great educational information to people who want to be a part,” Elmore said. “And then Cliff, I mean, his information and systems and the archival aspect and the historical aspect is really important as we’re all trying to bring this together.”

Elmore also said that Hight brings a different perspective to the conversation as a white male — which is helpful during their thought process because he represents the majority of the population of K-State and the Manhattan area.

Choma said that the three have been doing this kind of work for a very long time.

“I know people may see this as a response to what’s going on nationally, and what’s going on locally with our students, Black at Kansas State, but we’re not new to this work, we’ve been working with all students – students of color, international students, white students,” he said. “We’ve been helping lots of students for a long period of time, and this is one aspect that needs to come out and we need to be supportive of students, faculty and staff.”

Choma also said that the College of Arts and Sciences is not new to this work.

Elmore said they began planning these groups in the fall of 2019, giving themselves a year to gather resources and further prepare.

“And so, like I said we could have never planned for all the things to happen,” she said. “But we were talking amongst ourselves — it was like it feels really good not to be on the reactive end. Like, we’re just going to continue on like we were already doing this. We didn’t expect this book to be now like on the number one best-selling list.”

In terms of the goals they hope to achieve with the communities, Hight said he hopes individuals look at how they can try to help influence change where they can.

“For a lot of social movements that have revolved around race and ethnicity, people who are most deeply affected by those injustices have usually been the ones at the front lines and white people have usually not been as heavily invested,” he said. “And so, from my perspective, something that I think is important is how do I look at what I can do differently, and who I am and what my role is.”

Choma said his goal was to develop a better future for all K-State students — hoping it will become the cultural norm for individuals to walk around as anti-racist. Elmore said that being anti-racist takes practice and there are a lot of aspects people have to get through in order to build those skills.

Choma said that when it comes to anti-racism, it’s important for individuals to have a selfless mindset rather than a selfish one — something Choma said he sees in what Kendi writes in the novel.

“I think a lot of racism and all these isms start with selfishness and some hate, and some anger and those people, whoever those people are — whereas if you have a loving mindset, a selfless mindset, a giving mindset, a mindset to set others above yourself — that’s the kind of mindset that I think anti-racism supports, and then that’s what he’s promoting in the book,” he said.

When it comes to measuring the impacts of the communities, Choma says he looks for it in whether K-State is graduating multicultural students.

“The whole goal of bringing any student to K-State is to graduate them,” he said. “Yes, we want to educate them, yes we want to teach them how to think critically and competently — but if you’re bringing any student here and you’re not graduating them at the rate commensurate with their population or with them coming in, then you have a problem. So, we need the change that would happen, that could lead to policy changes, educational changes, less microaggressions that would lead to the increased graduation rates of students of color.”

Hight said he hopes that they will see evidence of impact in the people around them who are also participating in the journey towards anti-racism.

“I’m also involved in various university committees and so if I’m able to help influence policy development that addresses anything that has been racist or discriminatory in the past, then that’s another measurable,” Hight said. “If we’re able to change the policy then that can influence the way that we — the university — operates, those [are] other measurable ways that I think we can see what we’re doing.”

Elmore compared measuring impacts to the journey of the color purple at K-State. She said that it started as a little thing but little pieces throughout history collectively created a new, strong identity for the color.

She looks at the process of creating a more inclusive environment at K-State as little pieces that will work together to spark change.

“So, you know, I don’t know where we’re at on this trajectory, but I do know from learning from Dr. Kendi, that the history and the work of anti-racist behavior is not new, but it’s been continuing and this is its moment,” she said. “Who knows if this is the final little straw that breaks it all the way open for something so different?” 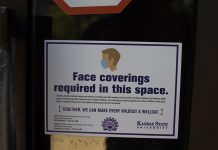