In an effort to ensure students are safe this fall, an architectural engineering professor led the evaluation of 738 classrooms across Kansas State’s three campuses for proper ventilation.

Julia Keen, professor of architectural engineering and construction science, said most classrooms are up to the American Society of Heating, Refrigerating and Air-Conditioning Engineers standard 62.1 — “the industry standard for indoor air quality,” Keen said.

Keen could not give an exact number of classrooms with proper ventilation because updates are currently underway for some units.

Keen specializes in HVAC systems and said this project specifically focused on the “V” in HVAC: ventilation.

“I helped communicate a need for this review on the technical capacity of conducting the analysis of the classrooms on campus, as well as helping assess some of rules for collecting the data,” Keen said.

Manhattan’s campus has 660 classrooms across 60 buildings, Keen said. Her team determined the COVID-19 seating capacity for each room, studied the construction plans to determine the layout of HVAC systems and ensured each room met ASHRAE standards.

K-State’s Division of Facilities will update systems not up to ASHRAE standards.

“We are working through the process of prioritizing and looking for some of the systems that will be fairly simple fixes,” Keen said. “Ones that won’t take an exorbitant amount of money or effort and potentially bring them back online with minor modifications.”

Keen said no one building had “bad” ventilation. Some of the older buildings on campus, such as Eisenhower Hall, have a mix of older and newer systems which led to certain rooms meeting the ASHRAE standards and others not.

“It doesn’t take care of the entire building. It only takes care of a portion of the building,” Keen said.

Keen also said some older systems properly ventilate buildings because of the way the system introduces outside air to the inside.

“The brand new stuff, most of that is in really nice shape and it was really just a change of how we operate those systems that allows them to accommodate the need for classrooms and ventilation,” Keen said.

Keen said some systems which previously were determined to not have proper ventilation have already been updated and added to a list of available classrooms. 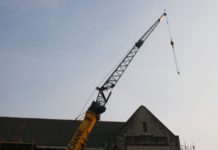 Campus construction projects to stay on schedule despite shutdown