Editor’s note: This story first appeared in volume 25 of the K-State Collegian in 1918.

No cases of [the flu] disease have been reported as of yet — Dr. Siever makes survey of drinking fountains, has gymnasium swimming pools closed

A formal statement may be issued within a few days in regard to precautions to be taken on account of the epidemic of influenza which is prevalent over this part of the country.

Unless absolutely necessary, college students have been requested not to travel until conditions are improved. This request is made that students will not come in contact with persons carrying the disease. Travel has been completely prohibited from some of the camps where the epidemic has gained a foothold.

Numerous applications have been made by students for absence leaves for the weekend, and to prevent the disease from being brought back to the college many of these have been refused. Requests for absence were especially heavy last Friday and Saturday as men who were entering the Students’ Army Training Corps considered that it would probably be the last time for a visit home before the Holidays.

A survey of the drinking fountains of the college has been made with the idea of suggesting improvements. According to Dr. Selver the college fountains are not sanitary and constitute one of the main means of transmitting a disease of this type. Influenza is contracted through the use of infected drinking utensils, towels, handkerchiefs, etc.

Both swimming pools in the gymnasium have been closed and will be thoroughly disinfected before opening again to the students. A number of persons have been examined at the college doctor’s office for influenza, but so far the results of the tests have not been made public. 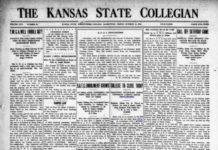 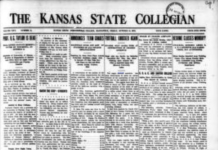 TAKE A LOOK: Comparing COVID-19 with the flu and the common...