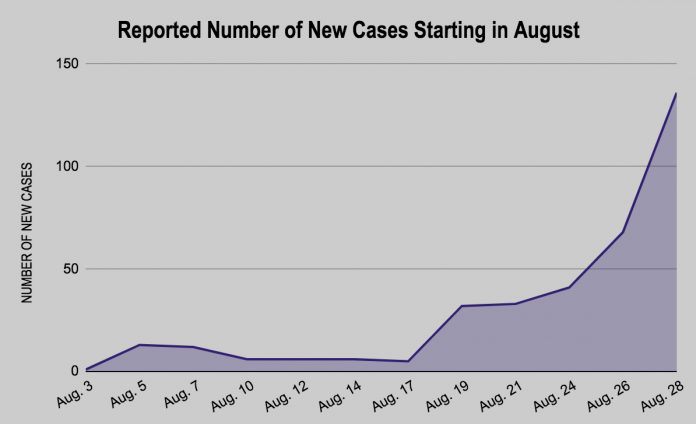 Editor’s note: An earlier version of this story said K-State had not previously released information about gating criteria. While the university has provided information about key metrics, it has not publicly identified the metrics’ thresholds and what actions could occur at each marker. A clarification has been made to reflect this.

On a day that the Riley County Health Department added more than 135 new positive cases of COVID-19, Kansas State also had an announcement to make about the local surge of new positive cases — testing at Lafene Health Center showed a positivity rate of 19.5 percent.

What that means for the modality of courses and the feasibility of face-to-face instruction moving forward is uncertain as K-State has not publicly shared the thresholds used for determining the gating criteria involved in those decisions.

According to a news release from K-State, 364 students are currently in quarantine and 167 students are in isolation. Quarantine is used to separate students who might have been exposed and isolation is used to keep people who are known positives from spreading the virus.

The release does not specify, however, if these students live on-campus or off-campus, but Jeff Morris, vice president for communications and marketing, said last week that the university has the capacity to isolate 400 students in residence halls if necessary.

Natalia Rodriguez, junior in human resources management and Spanish, said she’s not surprised by the surge in new cases, but that does nothing to curb her disappointment.

“It’s upsetting knowing that our community could have done better,” Rodriguez said.

Earlier this week, Lafene expanded testing procedures on campus to include some surveillance testing in residence halls. In general, cases documented in students have not been severe, according to Kyle Goerl, medical director at Lafene.

‘I kind of hate it’: Online classes account for 34 percent of all offered courses

Since classes began at K-State on Aug. 17, the county has added 315 new cases of COVID-19 — a spike that was steeper than the county had anticipated, public information officer for the city of Manhattan Vivienne Uccello said on Wednesday.

“It’s not the direction that we wanted to see in the community,” Uccello said.

The vast majority of the newest cases are in the 18 to 24-year-old age range.

“We are not accusing them, we are fighting … alongside them to keep them healthy and safe,” Uccello said. “Nobody’s against anyone we want to … keep you safe and healthy.”

“The leaders of local fraternities and sororities are cooperating with health department staff, but we have concerns that the safety messages are not reaching all of the members,” local health officer Julie Gibbs said. “It is imperative that anyone who has had close contact with a positive patient, or who is sick, remains in quarantine or isolation and takes personal responsibility for their actions.”

As a member of the Gamma Phi Beta, Rodriguez said she’s glad her sorority hasn’t seen an outbreak of cases, but hopes to see more students take “accountability” for their actions.

“I think we can come back from this if we all take it a little more seriously and act like the adults we are,” Rodriguez said.

Jordan Kocher, director of fraternity and sorority life at K-State, said in an emailed statement action would be taken against all chapters that “ignore local health orders and community policies.”

“I hope as a campus and a student body, we’ll start to take this a little more seriously,” Tel Wittmer, student body president and senior in secondary education, said. “Do the little things that we know to make a positive impact in slowing the spread. … Our actions … impact our community, too.”

To get tested for COVID-19 at Lafene Health Center, call your primary care provider or the health center to discuss whether you qualify for a test. Appointments may be necessary.