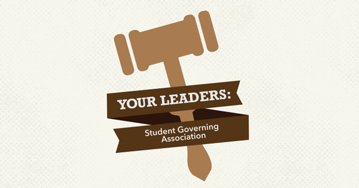 The meeting began with an address from speaker Jessica Elmore, K-State Alumni Association associate director of diversity programs, and ended with a speech from Nathan Bothwell, speaker of the student senate and senior in political science and communication studies, on grace in “times of great stress.”

Elmore warned against romanticizing and chasing the appearance of diversity while downplaying the conflict and work that true diversity requires.

“There is benefit to diversity, but when we romanticize it I don’t think we get to the reality of what diversity — a true diverse organization — is really, which is a lot more conflict and a lot more compromise,” Elmore said.

Bothwell introduced a resolution drafted by the executive branch to outline its five priorities for the year: affordability and accountability, student resilience and well-being, civic health and community, SGA modernization and revitalization, and sustainability and conservation.

Tel Wittmer, student body president and senior in secondary education, said while there is not yet a specific timeline for these goals, he is open to discussion. They will be reviewed in an executive meeting next week.

Among bills introduced was legislation that would add a land acknowledgment at the beginning of SGA meetings. Bothwell said the acknowledgment will likely resemble the text Faculty Senate reads at each of its meetings.

Bothwell concluded the meeting with a speech emphasizing grace in “these times of great stress.”

“We have some tough problems that we are going to tackle, and we will not always agree on the best way to solve them,” Bothwell said. “I really want to ask that you all show grace to each other.”

In his address, Bothwell said between classes and the state of the world, his first week back was full of stress, and urged students to take care of their mental health.

“This year is going to be trying, it’s going to be hard, it is going to be difficult,” he said. “We are literally facing a once in a century pandemic that no one who was currently living was prepared for. You being stressed is a normal human reaction.”

Bothwell urged students to not hesitate to send feedback and criticism to let him know what he can do better and ended by reminding students to show grace to both him and each other.

‘The right and moral thing to do’: SGA special committee puts officer pay cuts on the table