“I’m super excited to represent the department and hopefully come out on top as well,” Herrmann said.

Johnson said she is looking to give back to the department that helped her find her passion.

“Giving back to the program that gave us so much would be super awesome and that’s why I want to do well.” Johnson said. “I want to make my professors proud and show them that we appreciate them going above and beyond.”

Previous teams have set the bar high at the national level. K-State finished in the top three places 13 out of the 20 times the competition has been held.

“We have great faculty and staff that teach us what we need to know to prepare this financial plan to get there,” Jackson said.

Jackson said he was inspired after watching the 2019 team finish second in the competition.

“I was so happy and proud of them after all that hard work they put in for them to get second, it was tears of joy kind of stuff,” Jackson said. “I hope the hard work can lead to us being successful like last year’s team did.”

“We sat — I don’t know how many hours — on Zoom together, working on this,” Johnson said.

The competition is broken up into three phases. The K-State team advanced through the first phase, with the second and third phase taking place as part of the FPA Annual Conference beginning Sept. 30.

“We’re looking forward to compete against some of the top schools in the country and we look to keep K-State on top,” Jackson said. “The experience we’re getting and the connections we’re making will hopefully lead us to jobs after graduation.”

Herrmann said the success of previous teams makes it exciting to be a part of the current team.

“I’ve always looked up to everyone that has previously been on the team because they have great careers now and have done really good on their certified financial planning exam,” Herrmann said. “It’s also exciting that the faculty see me the same way they saw those people too.” 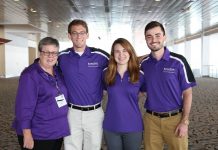