Home Featured Home ‘We have got to work together’: Bollier discusses campaign priorities during virtual...

As part of a virtual tour of Kansas universities, Democratic candidate for U.S. Senate Dr. Barbara Bollier said she is “all about transparency” while speaking to Kansas State students.

Bollier said she grew up a “moderate Republican,” but found herself at odds with the Republican party at times through her career in the state legislature. Bollier switched parties in 2018 after Gov. Laura Kelly was voted into office, but she said “her votes haven’t changed at all.”

Bollier said politics are about the people. Not one party has all the answers, she said, and they must work together. Democrats, in her opinion, show they have values while Republicans do not.

“We have got to work together,” Bollier said.

Her first priority when elected is a hot button issue for many Kansans, she said.

“What’s first for me is what is first for Kansans — health care reform,” Bollier said. “We need to get right to work on that.”

Bollier said she doesn’t support Medicare for All, but does support a public buy-in option. Another way to make healthcare more affordable would be to negotiate with drug companies for lower prices, she said.

‘Telehealth’ may be the new normal for all types of resources, campus health officials say

“My opponent [Republican Rep. Dr. Roger Marshall] has voted against that,” Bollier said. “If you’re going to reduce cost, you have got to go after the low hanging fruit and get it done.”

Additionally, Bollier said she wants to make higher education more accessible and affordable for students, but the way to tackle that issue has changed since the pandemic began. As COVID-19 has affected most areas of life, Bollier sees a need for students to be able to refinance student loans.

“As a federal legislature, we are going to make decisions if we are going to keep helping with relief packages,” Bollier said. “We need to pass some sort of package to help state and local governments.”

Bollier said the rising cost of tuition is a side effect of state governments not being able to adequately fund education at this time.

“I will be exploring things, but it is so important we have access to education,” Bollier said. “It isn’t limited to four-year universities. … We have got to keep it accessible to young people and old people alike.”

Bollier said access to high-speed broadband in rural areas of the state is also needed to help with K-12 education. Rural Kansas needs proper infrastructure to help people living in those areas. It’s also necessary for attracting and retaining people to live in those communities, she said.

“What I am about as a candidate is finding solutions to problems,” Bollier said. “It’s about listening. It’s not listening to respond to you, it’s listening to understand you.”

Bollier graduated from the University of Kansas with a medical degree and worked as an anesthesiologist before running for the Kansas House of Representatives in 2010. With a pandemic affecting most of the county, Bollier said she will listen to science and medical advice and plans to advocate for others to do the same.

“We have got to get people in our government who are civil, who have integrity,” Boller said. “What we don’t need in Washington is more partisans. We need to be about Kansans and what they need.” 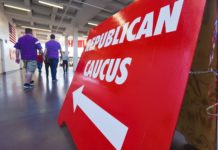