To ensure the few in-person classes students attend this fall won’t be disrupted, Kansas State won’t cancel classes for KSUnite this October. Organizers decided to hold the conference virtually on Oct. 13 due to COVID-19.

“Here at Kansas State, we have been fortunate enough to have three very, very successful KSUnite conferences, all of them bringing thousands of K-Staters to the Anderson lawn and the Student Union, and with this pandemic, that’s just not possible [this year],” Samuel said.

Because of the reduced time on campus this semester and the value currently placed on the few in-person class meeting times, Samuel said canceling classes would not be the best option.

“It’s very important … because we are operating in a hybrid modality for the delivery of our instruction that we recognize the strain that has been placed upon our faculty as well as our students in the reduction of face-to-face class time,” Samuel said. “Because of this it really would not be good for us to cancel class knowing that we are going to be doing [the conference] virtually.”

‘Telehealth’ may be the new normal for all types of resources, campus health officials say

While students will miss out on the opportunity to connect with others during the event, Samuel hopes the virtual conference will have a good turnout.

“I sure hope it won’t take away from students’ ability to tune in,” Samuel said. “I’m hopeful that faculty can leverage the content of their curriculum to encourage their students to participate. Maybe they could even engage in some of the dialogue or do something during the class period.”

Speakers will present virtually beginning at 1 p.m. Students can participate in live breakout sessions from 2 to 4 p.m.

Kate Thomas, freshman in political science, worries the decision to cancel classes will take away the importance of the event. If students have prior commitments to classes, they may be less inclined to participate.

“Not only do we have the Black Lives Matter movement and all of the racial tensions here, but we also have the Twitter scandal that happened and the continued support for specific instances of racism at Kansas State,” Thomas said. “It’s something that we as a community and as a school need to work on, so [the conference] could definitely be beneficial with everything going on.”

Over the summer, K-State athletes organized a strike after a student made a controversial tweet about George Floyd’s death. After K-State administration created an 11-step plan to work on campus diversity efforts, the athletes ended their strike.

In addition, Black Lives Matter protests and protests against police brutality occurred in Manhattan several times from May to the present.

Nevertheless, Thomas wishes for a prosperous turnout at KSUnite and the virtual conference proves educational to all Kansas State students. 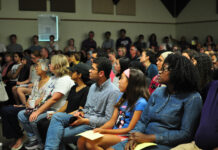