Gonzalez, junior in finance, and Leal, junior in marketing, founded United Latinas: Powerful and Educated which was inspired by a Hispanic leadership conference held last year in Chicago. Participants at the conference were able to share their experiences at school and in life through the lens of their Latinx identities.

After months of forming a mission statement and value pillars, LUPE held its first meeting in Forum Hall on Sept. 1. More than 20 students attended in-person and over Zoom.

“What I enjoyed the most out of it was just that people were actually talking to each other even though we were six feet apart,” Leal said. “I feel like in some organizations, you just don’t get that time to build the community.”

With Hispanic Heritage Month coming up — Sept. 15 through Oct. 15 — LUPE is making preparations for discussions and events to spread awareness of its members’ culture.

Discussions of issues within Latinx and Hispanic communities, what different cultures in Chile or Colombia are like and more are in the works so students can learn from each other’s experiences. Gonzalez and Leal said the group also hopes to partner with local businesses to get the Manhattan community involved.

Leal said this motto speaks to the shared culture and backgrounds of Latinx people while acknowledging that each individual has a unique story to share.

“I feel often times, whenever you think of Latino or Latina, you just have this picture in your head, and so we’re trying to fight that because that’s not the case,” Leal said. “Latinas come in different shapes, sizes, colors, different languages —everything.”

The founders of LUPE drew inspiration from other schools’ Hispanic and Latinx Organizations and Black Student Unions for their value pillars: unity, future, health, cultural awareness and community.

Due to importance of in-person instruction, university won't cancel classes for virtual KSUnite

Inclusivity is one of the most important aspects of the organization to promote, Gonzalez said.

“We want people to know that even though it says ‘Latinas,’ it’s open to anyone — any gender, any way that you identify,” she said. “We focus on those (Latina) aspects just because that’s what we are, and that’s what we know best, but it’s not exclusive.”

The main issues within the Latinx community that LUPE hopes to address include machismo or toxic masculinity, abuse and oppression of women, immigration struggles and society’s view of Latinx women.

Gonzalez said a current focus on the census will help encourage Latinx representation in the population.

“We want (members) to know that it’s not a danger to be counted, because I know that was a big stigma,” Gonzalez said. “Growing up, my parents were like, ‘Are we gonna fill that out?'”

The political climate in general will also be a focus for LUPE in the coming months.

“We want to get people more informed about their vote, what the parties are actually representing and what they’re advocating for,” Gonzalez said.

While the census and November election are LUPE’s current points of focus, Gonzalez said discussions within the organization will change along with the times.

“You know, the world is always changing, so who knows?” Gonzalez said. “There might be other issues next year. One issue at a time.” 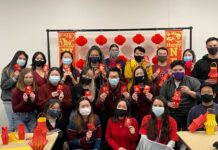