Kansas State students are preparing for what is set to be a Manhattan game day unlike any other.

K-State football will kick off their 2020 fall season against Arkansas State at home this Saturday.

K-State Athletics recently announced a 25 percent capacity for the stadium during home football games. Masks and social distancing will be required in the stadium and re-entry and tailgating will not be allowed.

Only students who purchased a season-long pass prior to the July 31 cutoff date will be allowed to file into the stadium this year.

Daniel Rule, sophomore in political science, said he feels lucky to be in the limited number of students that can attend games in-person this season.

“We still get football,” Rule said. “I get to go to the games, it’s an awesome opportunity.”

Rule said he purchased tickets shortly before the deadline when he wasn’t sure if there would be fans at the games or even games at all.

Even though it was risky, it was a risk he was willing to take. He also said he appreciates the fact K-State allowed students to be a part of the limited number of people allowed inside the stadium.

Some students, however, will be watching the games elsewhere this season. Sophomore in business administration J.P. Soares said after attending all but one football game last season, finding out he wouldn’t have the opportunity to see the Wildcats play in person this year was bad news.

Soares said he hadn’t bought tickets because he wasn’t confident that college football would be played this fall. When he found out there would be games with fans, it was too late for him to get tickets.

He’ll still be tuned into the Wildcats every Saturday though.

“A lot of my friends also aren’t going to the games, so we can still get together and watch,” Soares said.

Soares said if he gets the opportunity to purchase a ticket or borrow one from a friend, he’d love to attend a game.

Both students agreed that whether they’re in Bill Snyder Family Stadium or watching from home with friends, the experience will be quite different from the past.

“Obviously I go there for the game, but it’s not all about the game,” Soares said. “It’s also about the fan experience, being with your friends watching the game, huge crowds tailgating and obviously they took away all those assets. The atmosphere is going to be completely different. And that’s also something I enjoyed a lot, almost just as much as the game.”

Soares and Rule also agreed the guidelines in place for Saturday seem logical, but they’re unsure if the guidelines will completely eliminate the spread of COVID-19. Soares said he is concerned about people entering and exiting the stadium, as well as people going to the concession stands or bathrooms.

The two say that their sophomore year will not be the same without a packed stadium at every K-State home game.

“I feel like K-State football is a big part of the school and the college experience,” Rule said. 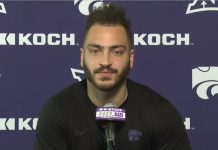 OPINION: Wildcats have treasure chest at running back position